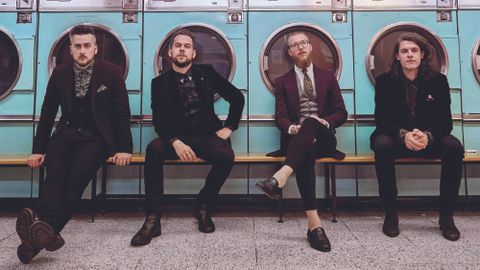 You can’t put a price on self-belief, and Tax The Heat sound so utterly self-assured on this follow-up to their well-received 2016 debut Fed To The Lions, you get the feeling that, for them, success is not only inevitable, it’s already here. And this ingrained confidence in what they’re doing makes the obvious touchstones that provide the bedrock of their sound – the layered Queen choral bursts, the White Stripes simple-notsimple blues battering, the cocksure Thin Lizzy swagger – appear less like pastiche and more like taking the responsibility of carrying a grand old torch. On The Run even begins with a burst of what sounds suspiciously like Steppenwolf’s Magic Carpet Ride, before barrelling into a much more earth-bound game of cat and mouse, as our hero and his girlfriend take to the road to outsmart the police that are on their tail for an unnamed misdemeanour. Basically, it’s everything Wolfmother have been attempting for all these years but never quite achieved. Tax The Heat are even happy to pepper Money In The Bank with cowbell, and it still doesn’t sound too cheesy or dated.

There’s more drama at play than a Netflix original series here too, mainly thanks to singer/guitarist Alex Veale’s camp vocal flamboyance, with its glass-shattering falsetto flourishes and his clear delight at rolling around borderline daft lines such as ‘His disposition, more ammunition/What came first, the eggs or the chickens?’ on the title track.

It’s no Darkness style pantomime, though. They’re taking a serious look at the utterly astonishing Trump/Brexit/ world-falling-apart era we currently find ourselves in. It’s just a case of keeping the party going as a reaction against the mess swamping up around us, dancing in the face of adversity and tweaking the nose of the powers that be. All That Medicine and Taking The Hit even hit a queasy disco stride, although the band do bring things to a close with a dose of glorious windswept gravitas on the soaring The Symphony Has Begun, which, like all good cliffhangers, leaves you desperate to know what’s going to come in the next chapter.

With a nod of deference to the past grandmasters and a thoroughly modern outlook, Tax The Heat are perfectly placed to reintroduce unadulterated classic rock for the next generation. Goodness knows they have the unwavering confidence to give it their best shot.