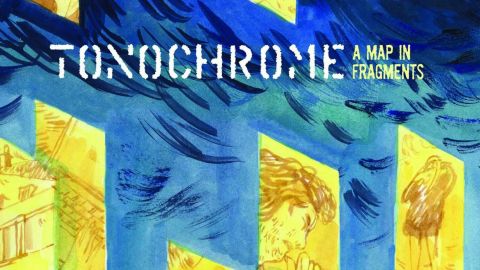 It’s always a joy when jaded ears are refreshed by sparkling music that’s largely uninterested in following trends or staying within expected boundaries. Formed in 2011, Tonochrome’s first album is an accomplished affair. Predominantly composed by vocalist Andres Razzini and keyboard player Steve Holmes, their deceptively simple but striking arrangements, occasionally reminiscent of Sanguine Hum, enable well-crafted songs to blossom in unexpected ways. A distinctive feature of A Map In Fragments comes from the inculcation of cyclical motifs looping through several songs, effectively forming a kind of DNA from which stunning moments evolve and grow. The addition of a string quartet, a classical brass section and chiming lead guitar from Knifeworld’s Charlie Cawood bring with them a subtle refinement. The layering of brass and strings, and their dynamic swells, aren’t unlike some of the moments found within American composer John Adams’ more introspective works. Bridging chamber pop, rock and beyond, the map Tonochrome refer to may well be in fragments, but the treasure is there for all to hear.