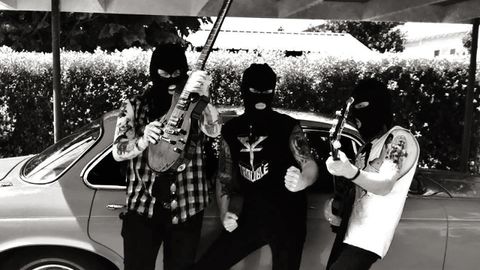 I just love shit like this, man. Ratt Face sound like they shoulda been in the battle of the bands at the end of Up In Smoke but instead they broke up in the van along the way to the show and left their singer to die in a dark alley somewhere.

“It’s time to bring grunge back to the people” has to be the worst mission statement since “Our meat belongs in your mouth” (the butcher shop on the corner of my street). Bad sloganeering aside, Switzerland’s Burning Fuses deliver a cannon-blast of ferocious bad-times rock’n’roll that would make, like, Blood Circus and Bundle Of Hiss proud. (6⁄10)

If you’re super-hip then it might please you to know that Mink Daggers is a sorta punk’n’roll supergroup, featuring various members of The Humpers, Throw Rag and The Hitchhikers. But even if you’re some clueless dummy, it should still be obvious how gleefully outta control this EP is. Pure wall-bouncing, ripsnorting, wreck-the-joint rock’n’roll. (7⁄10)

Texass is an album full of sloppy, slipshod, foul-mouthed Camaro party rock by dudes who are never gonna be able to afford a Camaro in their lives. The unmistakable sound of puke and liquid courage and regrettable pornography. Essential listening for teenage zeroes and sexually inadequate weirdos. (6⁄10)

Screamalong goth’n’roll with a Misfits-y horror-punk edge from the abandoned asylums and blood-drenched slaughterhouses of Georgia. You don’t have to like video nasties to dig this, but with gorefests like Devil’s Trap, Blood Junkies, Springwood Slasher and Death Comes For You on deck, it sure as fuck helps. (6⁄10)