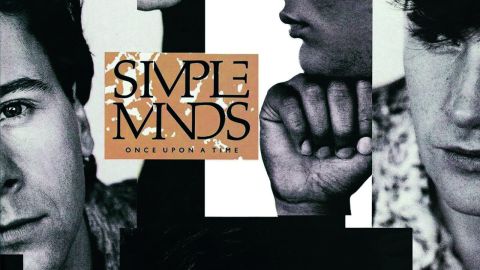 Simple Minds’ trajectory was upwards from their inception in 1977, but few bands before or since have achieved their commercial zenith seven albums and eight years into their career.

Once Upon A Time saw them ascend to the next level following 1984’s Sparkle In The Rain, which ‘merely’ made them big in Britain, Europe and Down Under – pointedly, not the States. This one did, however, break them there and gained them access to the stadium stratosphere, that giddy realm whose rarefied air probably only U2, the Stones and Springsteen were allowed to breathe.

And it was all on the back of this album (No.1 in the UK, Top 10 in the US) and its attendant singles: Alive And Kicking, All The Things She Said, Sanctify Yourself and Ghost Dancing, the first three of which were (largely Top 10) hits on both sides of the Atlantic.

In an act either of supreme confidence or suicidal madness, Don’t You (Forget About Me), their global smash from the movie The Breakfast Club, which more than anything proved their calling card Stateside, was never included on the original album, although it does appear on this Super Deluxe version, in both seven- and 12-inch form.

As do many other things: six newly remastered CDs’ worth, in fact. CD one features the album’s eight tracks; CDs two and three comprise single mixes, B-sides, and alternate, live and extended takes, four of them previously unreleased; CDs four and five are the whole of Live In The City Of Light, the 1987 live double mostly recorded at the appropriately named Le Zénith in Paris the year before as part of the Once Upon A Time tour; and there’s a final DVD A/V with a hi-res 5.1 surround sound mix of the album and promo videos for all the singles and Don’t You (Forget About Me). Plus you get a 36-page booklet with rare photos and new interviews with the band, as well as a track-by-track guide.

That just leaves the music, given a bright, bold anthemic shape and scope by veterans Jimmy Iovine and Bob Clearmountain. These are more than songs – they’re clarion calls, sung out loud and clear by a Jim Kerr brimming with the confidence of a man who has woken up to find he suddenly has the world’s attention. It might have been a bombastic step too far for early Minds-heads, but for everyone else, this was the start of the story.