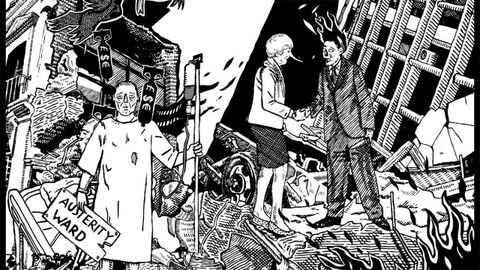 If Rotting Civilisation sounds old, that’s because it is. Not chronologically speaking, more because it’s an homage to 80s hardcore and the days when Earache issued releases on flexidisc, performed by dudes who cut their teeth back in the day and haven’t stopped since. Featuring three members of the final Cathedral line-up, Septic Tank’s debut album, despite being some two decades in the planning, was created in an urgent handful of days after some deft schedule juggling. Terse, trimmed-fat songs are powered by years upon years of absorbing – and, in some cases, touring and/or hanging out with – Cryptic Slaughter (Fucked), Celtic Frost (Death Vase), Septic Death (Divide And Conked Out), Discharge (Victimised), Black Flag (Social Media Whore) and G.I.S.M. (You Want Some?). The material combines rocket fuel energy and creaky joint experience while seemingly meshing every great guitar tone from the 80s into an ominous buzzsaw wall.

Lee Dorrian barks out lyrics like he’s auditioning for Heresy and drummer Jaime Gomez Arellano belies his producer’s ear for detail by committing some laughable, yet charming, tempo wavering. All of this authentically salutes an often-imitated age and demonstrates that the true fountain of youth is located under piles of dusty vinyl and tape-traded cassettes somewhere in Birmingham.