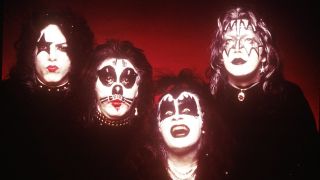 On the band’s sixth studio album, Love Gun, Ace Frehley finally cut his first lead vocal. He’d written Shock Me after being electrocuted on stage, and sang it in the nonchalant manner of Keith Richards. He was one cool motherfucker.

Paul Stanley – who as well as singing it also played bass on Love Gun – once described this loaded ’n’ lascivious track as “quintessential Kiss and probably one of the five essential signature songs”. But is he talking about a Glock, or his cock? Discuss.

Producer Bob Ezrin demanded that Gene sing this song, and not Paul, who wrote it. It was a brilliant call. The most epic of all Kiss songs, God Of Thunder defined Simmons’s OTT persona and became his calling card.

A twinkling piano ballad sung by Peter Criss, this used to provide a useful breather amid the blood and thunder of Kiss’s live shows. The Kitty Kat would clamber down from his riser and, with tears streaking his whiskers, chuck roses into the audience. Strange to think it was originally titled Beck, after a girl named Rebecca.

Written by Paul Stanley with Bob Ezrin, producer of, and Kim Fowley, mysterious Svengali to teen-girl rock group The Runaways, this provocatively titled and sexually charged track is a potent combination of rock-star vanity and groupie fantasy.

Paul Stanley: “Strutter was written when the band was a trio. Lyrically it was my ongoing fascination with women in the New York glitter scene. I was a middle-class kid from the suburbs who was suddenly thrown into this rock world that was taking place in New York.”

This classic drinking song was written by piss artist Ace Frehley but sung by teetotaller Gene Simmons because Ace wasn’t confident enough to sing lead back in ’74. Forty years on, is still the most kick-ass Kiss track.

3. Rock And Roll All Nite

In 1974, Kiss were told by record company boss Neil Bogart: “You guys need an anthem.” The result was an American classic: Rock And Roll All Nite. The live version was their breakthrough hit. It remains the definitive Kiss song.

Gene Simmons: “Deuce was written in my head on a bus. I heard the lick, the riff, the melody, the whole thing. We arranged it right on the spot and knew that it would be a staple for years.”

It was a close call, but you voted this timeless ode to the power of rock’n’roll the greatest ever Kiss song. It was in Detroit, not their home town of New York, that Kiss found their biggest audience in their early days. In return, the band gave the Motor City its own rock anthem. No Kiss show is complete without it.

Paul Stanley: “On a previous tour somebody had gotten hit by a car and killed outside the arena. I remember thinking how weird it is that people can be on their way to something that’s really a party and a celebration of being alive, and die in the process of doing it. So that became the basis of the lyric.”