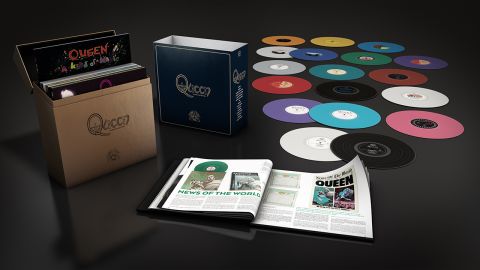 Ah, the sumptuous flamboyance – it could really only be Queen. Any old superstar-statused Tom, Dick or Lemmy can chuck 18 rainbow-hued, 180-gram wodges of virgin vinyl at their remastered back catalogues.

Artists of even limited legend can lovingly half-speed lacquer their darlings from original master tapes, having previously digitised, re-digitised and probably de-digitised them down the decades for countless ‘here today, gone tomorrow’ formats apparently designed with the primary purpose of asset-stripping wallets with extreme efficacy over and over again. But only Queen would have the glorious audacity to accompany their complete, replasticed studio albums with a limited-edition Queen turntable, manufactured by Rega and boasting a Queen crest.

Obviously, it’s an indefensible indulgence, but that’s sort of the point. The sheer ostentatiousness of the entire luxury-priced (vinyl circa £300, turntable £315) software-plus-hardware combo is what makes it so essential. That and the fact it includes Keep Yourself Alive, Brighton Rock, BoRap, Tie Your Mother Down, Hammer To Fall et al, all pressed in different colours, plus a big old book, 320kbps download codes and loads of surplus cardboard to sicken and crush your less affluent friends.

Bottom line: even without the turntable it’s a truly magnificent chunk of kit, but nowhere near as dazzling, breathtaking and desirable as the timeless genius that’s pressed into its glorious grooves.

The German-language version of Gabriel’s third album gains a limited-edition, half-speed master reissue. Notable for the introduction to Biko, where the hymn Nkosi Sikelel’ iAfrika is used instead of the English version’s Senzeni Na?. Spiel Ohne Grenzen, indeed.

Japanese acid-punk oddballs Bo Ningen join forces with London-based wax pranksters the Vinyl Factory to release this limited-edition 12”. Each of the 300 unique copies is daubed by “black hair dye head-banged onto the record sleeve”. It’s not clear if this provides the band with a living.

The tri-colour deluxe version may have already sold out, but there’s still an ultra-clear vinyl edition of 1,000 copies available, as the purveyors of demented neo-psychedelia go unplugged for album number seven.