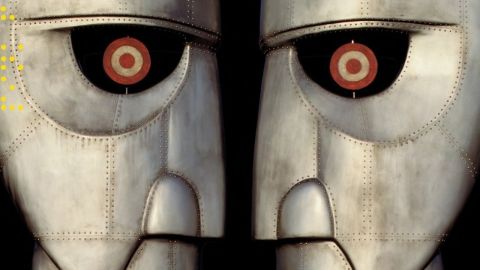 Like all the crown jewels of the industry’s prime time that are still capable of jemmying wallets ajar, Pink Floyd catalogue anniversaries are never knowingly uncelebrated. Twenty years ago – even if it was a little later before the fact was fully conceded – The Division Bell became a studio sayonara that many saw as an unsatisfactory checkout. Some 12 million others, in contrast, voted ‘yes’ with their hard-earned, and took the grand endeavour to No.1 in 10 countries.

Much was made at the time of a new cohesiveness within the ranks; of real, three-in-a-room improvisation; of David, Rick and Nick’s two-week, starting-from-scratch field trip to Britannia Row Studios in London that produced a new spontaneity within the fold. Wright, indeed, would not only wield more Hammond, but land his first lead vocal since Time: he sang on Wearing The Inside Out, which featured Floyd’s old tenor sax confidant Dick Parry, who climbed back on board for the first time since Wish You Were Here.

The album’s remarketing is open to all the usual accusations of flogging a weary horse. But as ever, that’s in the eye of the beholder. Countless followers will be delighted to lay their hands on a six-disc box set that boasts more than just the tactile pleasures of replica clear seven-inch and 12-inch discs, collectors’ prints and other such now-obligatory package-stretchers.

Here also, for the first time, is Andy Jackson’s pristine and vast 5.1 audio mix, an HD Audio version, and the newly directed video for the album’s Best Rock Instrumental Grammy-winner, Marooned. That beautiful, panoramic clip, filmed in Ukraine in April and directed by Aubrey Powell of Hipgnosis, casts Gilmour’s wordless tour de force in such a fresh, crisp light that it’s impossible not to pine for more visual companionship.

The Floyd’s final 67 minutes open with strange sound effects, seemingly cast off from a 1970s Doctor Who episode, on Cluster One. The sonic reassurance of familiar old friends is soon at hand, though, mellifluously administered by Gilmour’s honeyed guitar texturing, Wright’s soul-deep keyboards and then Mason’s stalwart drums. So far, so suitably enigmatic, mused many a Floyd hardliner 20 summers ago. The ruthless dissection, in some quarters, of what followed was administered by strict theologists unwilling to let the band park its sound in the last decade of the 20th century. For the Floyd Orthodox Church, never mind division bells: as the dry ice and female backing vocals of rock conformity were perceived to roll over much of the set, from What Do You Want From Me onwards, alarm bells were clanging everywhere.

What twisted the knickers of those contemporaneous critics is unlikely to have been cast to the wind in the meantime. If anything, while back then they would have been clinging to the hope of further recordings by the band, the increasing realisation that this was Pink Floyd’s last studio stand may have made its perceived shortcomings all the more unpardonable.

At the remove of two decades, during which time other, earlier group works have only grown further in stature, what strikes one is the way the latter-day trio incarnation had, perhaps unconsciously, sacrificed at least one layer of the mystery so essential to their aura. With most of the words contributed by Gilmour and his soon-to-be wife Polly Samson, a certain lyrical opaqueness was retained, on themes that seem to touch on communication, or the lack of it. But in sonic construction, pieces like Take It Back and A Great Day For Freedom were a little too see-through and straight-ahead for many a veteran campaigner left over from the dark side, or even earlier.

At 67 minutes, it betrayed some middle-age girth. But the preponderance of two- and even one-star reviews that greeted the work in ’94 was, you felt, largely the work of those who never forgave the band for daring to continue after Roger Waters’s departure. Rolling Stone asked if this was really Pink Floyd at all. Nick Mason heard Meddle in its musings: some critics sensed only meddling with the band’s legend.

Any epoch-making band can be haunted, or at the very least determined, by their past, and the greater the legacy, the harsher the judgement. From this distance, this sounds nothing like a bad record, and if it had contained more material with the significant weight of the closing High Hopes, which sways with sombre majesty, satisfaction might have been more widely distributed. It will be fascinating to see what the post-Pink generation makes of it.