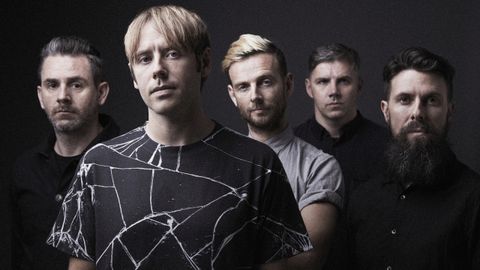 “One of the UK’s most successful rock bands of the decade” Lostprophets may have been, but no amount of earned goodwill or fan loyalty will save a band when their singer has been found guilty in one of the most heinous criminal cases in living memory. Nor is it likely the band born out of the head-bending wreckage of their rapid unravelling will be reviewed without at least a passing mention to their former frontman’s twisted predilections. No Devotion exist because Ian Watkins – for reasons which will never be understood – made decisions that ruined lives. So in this instance, the context of their inception matters more than most.

But that was also the past, and the former Lostprophets members are guilty only of indulging in ridiculous try-hard photo shoots and making some melodic rock records that found widespread commercial success yet creatively didn’t match the best efforts – or wider appeal of – British contemporaries such as Muse or Biffy Clyro. The good news is that No Devotion’s debut supersedes anything their former band ever recorded. In something of a role reversal they’ve replaced style with substance.

Fronted by former Thursday singer Geoff Rickly, also enjoying something of a bold creative leap here, No Devotion have jettisoned the emo/pop-punk stylings of old. From the hazy, blissed-out atmospherics of iridescent opener Break – imagine Deftones going chillwave – it’s clear they’ve put down the hair-straighteners and grown up.

The uplifting, synth-heavy Permanent Sunlight may stray too close to the chart current pop zeitgeist, but elsewhere on Eyeshadow and I Wanna Be Your God the dark post-punk spirits of Echo & The Bunnymen, Bauhaus and very early U2 are evoked, without ever aping them directly or indulging in retro production, while the towering post-rock instrumental Death Rattle could be lifted off Mogwai’s Mr Beast album. Deftly-delivered, this is no bad thing.

Their former penchant for Duran Duran-style pop is still evident in 10,000 Summers but it at least feels heartfelt, and Rickly’s restrained vocals lend an added layer of ambience to the emotive post-goth electro of Why Can’t I Be With You? One of the more obvious pop tracks, the band’s comeback single *Stay *sounds designed purely for radio play.

Drumming duties are shared throughout by two of the best in the business - Luke Johnson and human metronome Matt Tong, formerly of Bloc Party – and from its production to arrangement, this is a modern album that makes good use of producer Alex Newport and mixer Dave Fridmann. It’s liberated, more adventurous than Lostprophets ever were and far less haunted than one might expect. Instead there is a widescreen cinematic soundtrack quality to noir-pop songs reminiscent of Placebo, Depeche Mode and Bloc Party, in aesthetic if not entirely in sound. This an album more concerned with melodies than riffs, tones rather than poses. It will also rightfully see No Devotion shake off the unwieldy shackles of the past and embrace a new future.