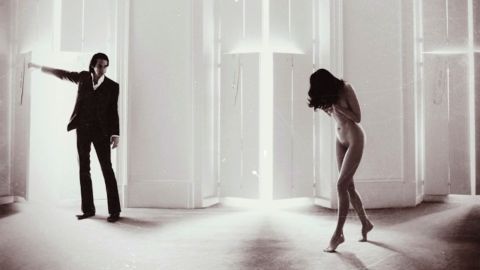 DIG, LAZARUS DIG!!!, in 2008, consolidated Cave’s untouchable position at the forefront of singer-songwriters, the Bad Seeds’ supernatural telepathy ejaculating stratospheric backdrops for his most complex lyrics yet, still riding the infernal energy of the Grinderman project.

Steam suitably let off, they haven’t attempted to top its animated bombast, instead cooling to a spectral reverie that was described by Cave, in long-playing offspring terms, as “the ghost-baby in the incubator”.

Produced by Nick Launay at a 19th-century mansion studio in the South of France, Cave’s latest modern fables are inspired by his Brighton home and weird internet tales, also nodding at the love songs he turned into an art form on 1997’s The Boatman’s Call – although the exquisitely bottomless ‘Mermaids’ juxtaposes both.

By the time the title track’s inspiring sepulchral whisper has ebbed down, it’s soul-swivellingly apparent that not only have the Bad Seeds delivered another healthy baby, but perhaps the most gracefully beautiful of the whole brood.