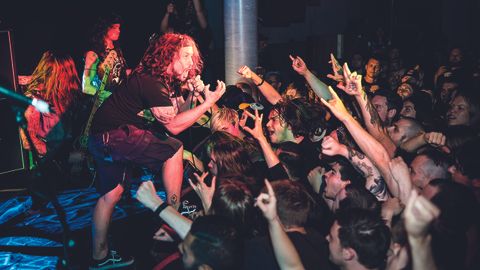 The DUNGEON [7] live experience might be an enjoyable racket, but there’s a lot more to these exciting young thrashers. Imagine young Kreator siphoned through the first Venom album; it’s unashamed full-on energy, and gets the packed crowd moving.

The “Municipal Waste is gonna fuck you up!” chant starts in the audience 20 minutes before MUNICIPAL WASTE [8] come on, and keeps going throughout the performance, but the ferocious fan reaction has always been part of what makes this band so entertaining.

“All I can see is a sea of shoes,” laughs frontman Tony Forester early on, a reference to the constant stream of stagedivers, and having pillars in the venue is no obstacle to a seething circlepit, as the band encourage everyone to use them for leverage. The Waste blaze through the classics, although they do alter the lyrics to I Want To Kill The President to I Want To Kill Donald Trump, to roared approval. Headbanger Face Rip sees Ryan Waste abandon his guitar to join Forester in lead vocals, rap-style, while Beer Pressure and Bangover are sweatily rousing. But it’s the climactic pairing of Sadistic Magician and Born To Party that gets everyone stomping, moshing and hollering. Municipal Waste get the Underworld fucked up!