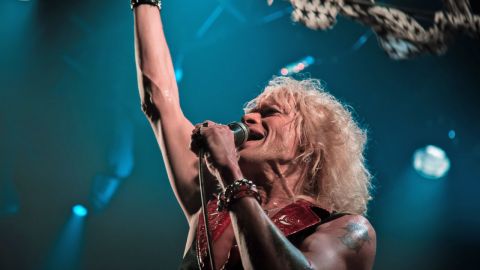 In the six years since the second dissolution of Hanoi Rocks, Michael Monroe has released three truly superb solo records, Sensory Overdrive being named Classic Rock’s album of the year in 2011.

Given that this tour is a co-headliner with another much-loved perennial of the glam-punk-metal scene, Hardcore Superstar, a bigger crowd might have been expected, but the overwhelming reaction to both groups is compensation of sorts.

For half an hour, Hardcore Superstar are terrific. Endearingly dumb and at times interchangeable, the Swedish quartet’s rousing, simplistic anthems are performed as though part of a mating ritual to woo the last female on planet Earth. However, it soon becomes transparent that something fundamental is missing: substance. An attempt to lighten the mood with an unplugged Here Comes That Sick Bitch merely comes across as ham-fisted, and that five-song encore? It felt like a motherfucking eternity.

While Hardcore Superstar linger like a bad smell for an hour and a quarter, Monroe keeps things to a lean, trim and manageable 55 minutes, plus a couple of well-earned encores. Jawbone a-jutting, eyeballs a-bulging, high-kicking like a deranged go-go dancer, sporting an outfit that’s eye-wateringly tight and garish, Monroe is part ringmaster and part stick insect. At 53 years old he has no business looking this good and singing with such force and range, but that’s what a clean-living lifestyle can do.

Being onstage in London, where Hanoi Rocks spent some of their earliest and most important years, is clearly bittersweet, but Monroe seems happy, recalling the night that Razzle (the drummer who perished in a car driven by Mötley’s Vince Neil), bounced a stick off a cymbal “just like Keith Moon” and almost decapitated Nasty Suicide, knocking the rhythm guitarist out cold. Momentarily Monroe seems misty-eyed, before declaring: “So let’s do some Hanoi, right?” and leading the band – featuring ex-Rocks cohort Sam Yaffa on bass, and with sterling contributions from guitarist Steve Conte, once of the New York Dolls – into a rollockin’ Oriental Beat.

But mostly the set focusses upon the solo years, primarily featuring numbers from the just-issued Blackout States. Old King’s Road embraces punk-rock roots and R.L.F. (short for ‘Rock Life Fuck’), could be Motörhead jamming with the Ramones. He also dips back into the short-lived Demolition 23 project for Hammersmith Palais and Nothin’s Alright.

The Ballroom goes wild for a final run-in of three Hanoi tunes. Tragedy, Malibu Beach Nightmare and the Creedence Clearwater-sourced *Up Around The Bend *are followed by his own *Dead, Jail Or Rock ‘N’ Roll, *while encores include an unscheduled romp through I Wanna Be Loved by Johnny Thunders & Heartbreakers.

“The real Hanoi was the Hanoi of the 1980s – the one with Razzle,” Monroe told your correspondent a couple of years ago, explaining why that group should never reunite. “[What I’m doing now] is called Michael Monroe, but it’s more of a band than that thing I had with Andy McCoy. I’m happier than ever.”