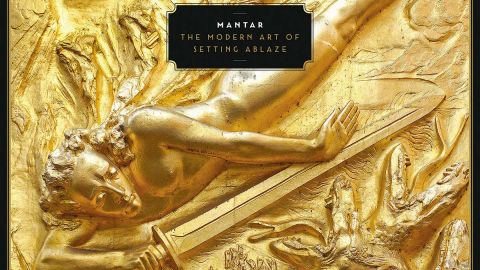 The Modern Art Of Setting Ablaze

As a quick refresher, let’s recall that this German duo’s discography reads like so: Death By Burning, Ode To The Flame and, now, The Modern Art Of Setting Ablaze. So fire is a topic guitarist/vocalist Hanno Klänhardt and drummer Erinc Sakarya have woven into their band over the course of six years. For our science know-nothings and chemistry dropout readers, know that heat, oxygen, fuel and a chemical reaction are the necessary ingredients for fire’s existence; all four are required and the more you add of any, the bigger the conflagration. Mantar have always worked to sound more expansive with their two-piece line-up, but putting metaphorical interest into practice, this album employs more instrumental layers, textures, effects and a rhythmic thump that connects both intellectually and primordially.

Album opener The Knowing crescendos into the twisted tri-tone tribalism of Age Of The Absurd, a filthy spire of mid-paced ooze populating a black hole between Slayer and Neurosis. Seek + Forget complements a more straight-ahead, four-on-the-floor rock feel with duelling guitars, walking bass and swelling strains of keyboards. Dynasty Of Nails and Midgard Serpent (Seasons Of Failure) are gnashing and untethered flailings at personal issues and societal demons, while Eternal Return could be the Melvins ferally mixing, mashing (and moshing, for that matter) different segments of Speak English Or Die. All of the above, it should be noted, is much more exciting than the band’s occasional manoeuvre into momentum-stemming, sparse and slo-mo doom territory and the persistent staccato of Hanno’s vocal delivery, which can wear thin after 40-plus minutes.

There’s the matter of how the additional thickness propelling this album is going to come across in a live setting, but as a standalone work, this album transcends sludge metal tropes with increased density and dynamics that shatter limitations and preconceptions of Mantar’s pared-down line-up.