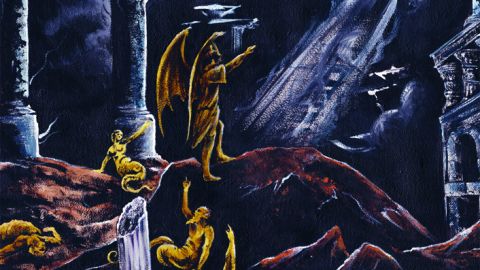 Hailing from Turku, Finland, Malum’s primitive savagery seems suited to its frozen lands of origin. The band released their first EP in 2014, but their sound is that of 1994: withering BM steeped in caustic fuzz, chewed by relentless percussion and spat in your face with the acidic bile of rasping vocalist Tyrant. An unrelenting ode to the dark one, Night Of The Luciferian Light sets alight amid O Satan, O Lucifer’s tolling bell and echoing incantations, silenced in the ensuing caustic churn. Altar Of Death slows to a mid-paced march, retaining its vehemence, driven on by rough-hewn, sawing guitars. By the closing title track, starting mournfully and ending furiously, Malum have done nothing to reinvent the wheel, but for atavists with an itch that can only be scratched by nail-spiked gauntlets, it’ll hit the spot.