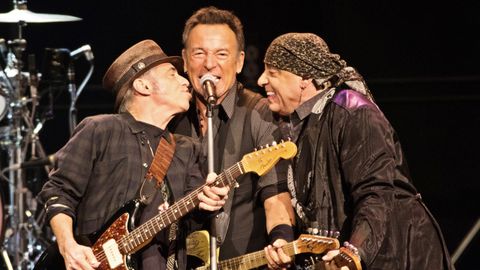 Across five decades, Bruce Springsteen & The E Street Band have forged an enviable reputation for offering one of the greatest live music experiences on the planet. It’s a distinction that holds true once more as they bring an awe-inspiring interpretation of one of the greatest works in their back catalogue, 1980 double album The River, to Chicago.

Given its scope, it’s easy to forget just how deep The River runs. Sure, there are fun party anthems like Cadillac Ranch and (his first No.1) Hungry Heart that still get people dancing in the aisles, but the songs that really hit home are those that carry the deepest emotional resonance: ode to fathers and sons Independence Day, the self-reflective Stolen Car, and mournful paean to lost innocence, The River.

For many fans half the fun of any Springsteen show is the thrill of guessing which song might pop up next in the invariably outsized setlist, and The Boss obliges. The final third of tonight’s three-hour plus performance is set aside for an anything-goes mélange of tried-and-tested crowd-pleasers, from Thunder Road to Born To Run alongside deeper cuts, Cover Me and She’s The One. There’s even a touching acoustic Take It Easy performed solo in tribute to recently departed Eagles founder Glenn Frey.