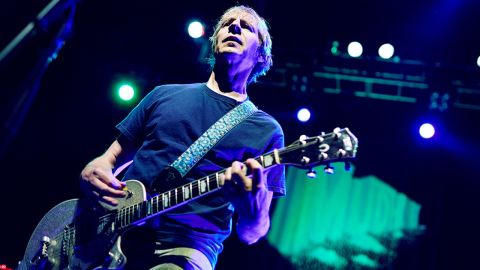 Having escaped the crushing wheels of the grunge bandwagon they drunkenly kicked into gear, Mark Arm actually seems to have sent time into reverse since their defiantly long-haired 80s start. With his shorter fair hair, sideburns and T-shirted leanness, he could be Stephen Stills in Buffalo Springfield in ’66.

Mudhoney are certainly historical heroes to many of the generation-spanning crowd packing out this seafront club. But like Pearl Jam, they have also become master classicists of their particular rock craft. A couple of goons filming Touch Me I’m Sick instead of feeling it betray the passing decades, but so does the band’s refined, reliable excitement. Sonic Infusion’s sludgy psychedelic malevolence and Chardonnay’s Exorcist-howling speed-punk show the subtle range in their basic formula.

Halfway through a 70-minute, 24-song set that blurs by, Arm dumps the guitar to caper and croon in his shredded, piercing voice. This emphasises the unbeaten yearning in these songs, a mix of honest self-loathing and stand-up rebellion that doesn’t date. A proper rock crowd understands.

A word, too, for another US punk virtue, the good-value bill, here giving a leg-up to Wolf Alice’s heavy folk and the excellent Seattle-based, dark narrative folk singer Barton Carroll. Everyone exits satisfied.