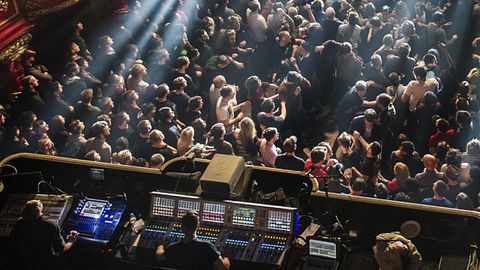 It has been a good year for Lifesigns. Keyboard veteran John Young’s project began six years ago, bearing fruit with 2013’s star-studded debut album. This pre‑Christmas show, the culmination of a headline UK tour, rounds off 12 months which saw a return visit to Cruise To The Edge and a pledge campaign for the just released Under The Bridge live DVD set.

It’s clear the band are in celebratory mood. The intro section of Lighthouse begins to percolate via tentative snare work from drummer Frosty Beedle and the sumptuous exploratory lead lines of guitarist Niko Tsonev (ex-Steven Wilson). From small beginnings the track becomes a tapestry of interwoven yet distinct four-part vocal harmonies, demonstrating the pop sensibility that has seen Young work with Bonnie Tyler for over two decades.

Telephone follows with a short but explosive drum display from the venerable Beedle, until he locks into Jon Poole’s funky slap bass. The bassist is the visual focal point throughout, pogoing and gurning his way around the stage, betraying his background in punk-influenced outfits Cardiacs and The Wildhearts. His high-register basslines establish him as another lead player in the richly melodic quartet.

The sugary mojito of sound could become sickly after a while, but Tsonev’s self-proclaimed “ugly” guitar occasionally cuts through the syrup. When not playing soaring solos, his atonal shrieks, howls and dive-bombs are the perfect foil to the otherwise meticulously crafted pop prog.

The keyboardist reveals that new song Different was inspired by the crowd scene in Life Of Brian to celebrate individuality. “You’re all different,” he says, eliciting a response of, “Yes. We are all different,” from the Monty Python fans. Poole leads us in clapping along to the intro of this anthemic number, while an impromptu rendition of_ Jingle Bells_ peals out.

The feel-good nature of Lifesigns’ music, along with muscular versions of John Young Band faves Kings and Open Skies, plus the festive party atmosphere, make tonight a special occasion.

Young explains that the project began with “A simple mantra to just do our best”, an ethos that’s ingrained in the epic Fridge Full Of Stars: ‘If you try your best you know you will be heard.’ On the basis of this performance, Lifesigns are set to be heard by many more people in 2016.