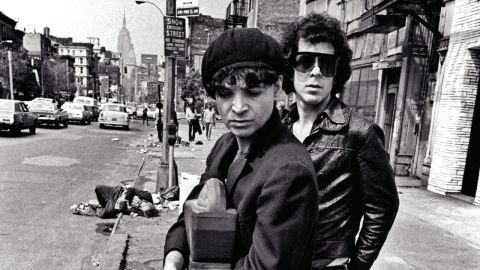 Notorious for epic excursions like Frankie Teardrop, 10 minutes of infernal screaming, reverb and radio static, and live appearances that would see vocalist Alan Vega wield chains or cut himself, Suicide are regarded as avant-garde extremists.

And yet, perhaps even more than Velvet Underground, they get to the dead, black essence of rock, its essential, electric pulse, its very fuse. All this while eschewing guitars and conventional drums.

They formed around 1970 in New York but only released their debut album in 1977; Vega seems to channel the spirit of dead Elvis on bleakly motorik tracks like Ghost Rider (‘America, America is killing its youth’). Since then they have recorded sporadically only to have looked like calling it a day this year with a concert in which Vega raged against the dying light of Suicide’s too-fitful career. They should have been huge but their provocative exposure of rock’s four square conservatism always worked against their prospects. Suicide of the commercial variety.

Kris Needs’s excellent account of their career is the most exhaustive they have received. It’s an astonishing story of a group who during their gestation period absorbed, often at first hand, the history of 20th-century extremes and rock’n’roll excess; growing up with Elvis and Thelonious Monk, hanging with Warhol and The New York Dolls, clearing rooms with their chaotic early gigs, primal, confrontational affairs dominated by the perspex-shaded keyboardist Martin Rev’s wailing organ drones and Vega’s brutal onstage theatrics. New York was more violent, more exciting back then and Suicide were at the heart of it.

Championed by music producer Marty Thau and Lester Bangs, they anticipated punk by years but were too much for the punk crowd, enduring volley after volley of physical abuse when they supported The Clash. They played a gig in Glasgow described as the most violent Bobby Gillespie had ever seen. Eventually, they were afforded the critical respect they were due but looked on frustratedly as electro-poppers achieved acclaim with a far more dilute version of their own dark, deep stuff.

Needs tracks their journey every step of the way, drawing on interviews he’s conducted over the years with Jayne County, Debbie Harry, Grace Jones and Joe Strummer, who described Vega as “one of the bravest men I’ve ever seen on stage”. He was, he is.