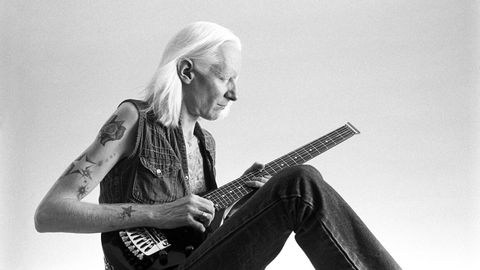 “It describes your whole life,” nods a bandmember when Johnny Winter floats Down & Dirty as a title for this posthumous biopic. And so it does. When it comes to the canon of great rock’n’roll fuck-ups, the late Texan guitarist – who died aged 70 in July 2014 – walked a road as hard and hairy as anyone. He’s perhaps the only man who could make director Greg Olliver’s last subject – Lemmy – seem like an early-to-bed lightweight.

Framed by Winter’s tour in support of final album Step Back, Down & Dirty spins a backstory that is always shocking, often sad. The young Winter was always raucous, we learn, thrown out of the church choir for singing too loud (“Those fuckers were singing too quiet,” he shrugs). But something changed at the age of eight, when kids in Beaumont, Texas picked up on his albinism. “I’ve always had anger problems,” he admits. “I got in a lot of fights at elementary school.”

The prejudice drove Winter on, for better, for worse. He quickly broke out, citing his blazing self-titled 1969 album as one of his favourites. But after heroin was offered at an LA party, he rapidly developed a taste for oblivion: “I thought only stupid people got addicted… but nobody can control heroin.”

Winter’s ingestion was staggering; at one point he reels off a list of narcotic preferences that reads like a chemist’s inventory. Sometimes, there’s humour in his excess (“I was on acid,” he recalls of gigging with Janis Joplin, “and I threw up all over her.”). But by the fag-end of the 60s the laughter stops as friends drop around him. “It was all the Js,” he remembers of the dead. “Jim, Janis, Jimi. I wondered if I was next.”

Johnny lived, but only just, recounting the time he OD’d and was revived by being thrown into a water butt (“When I woke up, I was pissed off that they got my velvet shirt wet.”). He floundered in the 70s, pushed into a more rocking sound that he hated, hoovering up the drugs, and only pulled out of the hole by working with Muddy Waters on 1977’s Hard Again.

The next trough is never far away. If heroin gave him trouble, it’s eclipsed by Winter’s decades-long addiction to methadone, which leaves him skeletal, monosyllabic and sleeping 14 hours a day. We hear how ex-manager Teddy Slatus turned this stupor to his advantage, and how his replacement Paul Nelson turned things around with a course of placebos (one of the most touching moments is camcorder footage of a disbelieving Winter being told that he’s been clean for two years).

Cut to the Step Back tour, and Winter is still good value. One memorable scene finds him hammering the vodkas in New Orleans and having to be lifted back onto the bus; another sees him commandeering the mic at a karaoke session (“Oh fuck, I’m really drunk!”). And as the live and studio footage shows, he was still a musical force to be reckoned with, right to the end. It’s heartening to know that Winter lived just long enough to attend the SXSW premiere in 2014 and see this zinging account of his astonishing life.