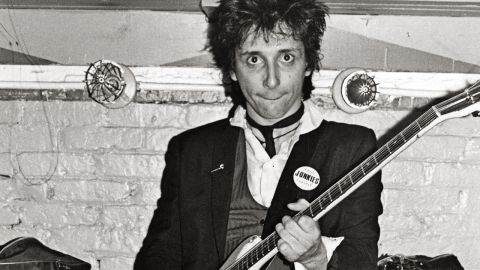 Despite the Heartbreakers’ LAMF debut sounding like it had been knitted rather than pressed (junk-eared production values, mastering faults, duff cut – take your pick, it still sounded like it had been recorded in a sock), there was still enormous goodwill for ex-New York Doll and lead Heartbreaker Johnny Thunders in 1978. While he was the punk firmament’s leading heroin evangelist – shortly after releasing their Chinese Rocks smack anthem, the Heartbreakers told Zigzag they were considering changing their name to The Junkies – it seemed that everyone wanted him to succeed.

Sex Pistols’ fans belatedly turning on to the Dolls wanted to make up for not buying their records first time around, The Heartbreakers had been the best live band on 1977’s UK gig circuit and Thunders looked so cool: a thrift store Keith Richards with an endearing delinquent lip curl and a guitar tone like a rip in the space-time continuum. Ultimately, with sticking-it-to-the-man at an all-time premium, who didn’t want to see the gutter-glam Wile E. Coyote finally slay the elusive tongue-poking Roadrunner of mainstream commercial success?

Signing Thunders simultaneously with The Pretenders, Real Records’ Dave Hill placed him in the studio with producer Steve Lillywhite and a cast of Speakeasy A-listers: ex-Pistols Steve Jones and Paul Cook; Only Ones Peter Perrett and Mike Kellie; Hot Rods Steve Nicol and Paul Gray; Phil Lynott, Steve Marriott, Patti Palladin, Chrissie Hynde et al. Even former Heartbreakers Walter Lure and Billy Rath joined the party for a spirited romp through The Shangri-La’s Great Big Kiss. And the results? Spectacular. Not just the pinnacle of Thunders’ solo career, but also the finest recorded evidence of Cook and Jones outside the Pistols.

So Alone’s core quartet of Thunders (guitar, vocals), Jones (guitar), Lynott (bass) and Cook (drums) – as captured on assaults on The Chantays’ Pipeline, the Dolls’ Chatterbox (now renamed Leave Me Alone) and the Heartbreakers’ London Boys (a fierce, embittered reply to the Pistols’ Doll-dissing New York) – are revealed as one of rock’s great lost combos. Elsewhere, Peter Perrett accentuates the fragile tenderness of (She’s So) Untouchable, Ask Me No Questions and lead single You Can’t Put Your Arms Around A Memory.