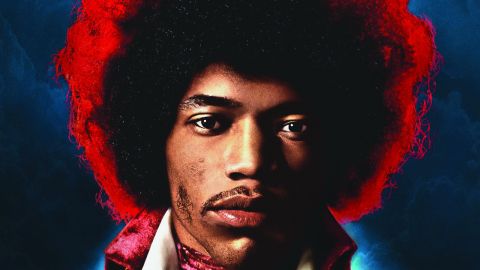 The final part of the trilogy that also includes 2010’s Valleys Of Neptune and 2013’s People, Hell And Angels, Both Sides Of The Sky might not initially send diehards into paroxysms, owing to over-familiar titles and a sleeve that airbrushes Jimi into biopic manifestation Andre Benjamin. But while Experience Hendrix insist that 10 of the 13 tracks are previously unreleased, producer Eddie Kramer’s modern technology-assisted brush-up ensures that songs long familiar on bootleg or posthumous albums have never sounded so good.

The much-trumpeted diamonds in the archaeological haul feature Hendrix playing with close friend Stephen Stills. The workmanlike $20 Fine could be from tracks Stills said the pair recorded together in London in March 1969, and archivist John McDermott said were being readied ten years ago. There’s also Stills’s robust version of Joni Mitchell’s freshly written Woodstock, recorded that September with Hendrix on fluid, funky bass.

The album’s highlight is an astonishing Cherokee Mist, Hendrix reflecting on his oppressed Native-American heritage, with supernatural feedback. Although Hendrix is credited for playing sitar, could this be the long-sought Holy Grail featuring Brian Jones? Late 1967 also provides a shimmering instrumental sketch of Sweet Angel, Jimi exploring the heavenly melody on guitar and vibraphone, and the poignantly personal Send My Love To Linda morphs into a liquid wildfire solo.

That leaves playful romps through Band Of Gypsys chestnuts Stepping Stone and Lover Man (aka Here He Comes, as reworked from BB King’s Rock Me Baby). The gloriously louche burn through Muddy Waters’s Mannish Boy (best of 44 takes in one April 1969 day) has already distinguished 1994’s Blues, and the contagious acid-funk studio vamp through Power Of Soul graced 1997’s South Saturn Delta.

If this is the last resurrected Hendrix studio material the world will see, then it’s a creditable send-off, yet we doubt it’s the last gasp it occasionally resembles.