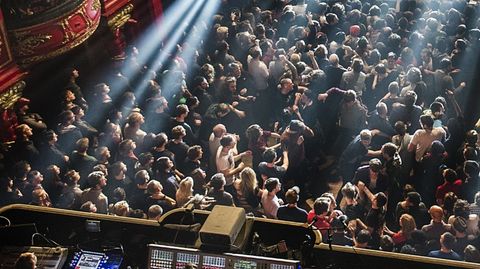 A late-night show, performed without the benefit of a soundcheck at a far-from-full venue is hardly the stuff of rock dreams, but, in the best possible sense, Jim Jones and his motley collection of refuseniks who form The Righteous Mind don’t care. “We’re chomping at the bit to play,”, he hollers, before slipping into the opening Boil Yer Blood and its skull-busting partner No Fool, both built upon furious, almost primal riffs which takes the feral, garagey sound of the Jim Jones Revue one almighty step further. With his suit slightly too tight, hair akimbo and occasional digressions into cheery anti-fascist singalongs, Jones is part carney, part defrocked prophet at one with the sweaty scuzziness around him. Needless to say, he’s as watchable as Peaky Blinders and still the toughest of cookies. While there’s less of a gang swagger to The Righteous Mind than the Revue, Jones is broadening his palette and when he growls his way through Hold Up, backed only by percussion, maracas and handclaps, the result is something midway between King Trigger’s River and PiL’s Flowers Of Romance. It ends with the traditional tsunami that is Alphashit: guitars are held aloft, but, after 50 thunderous, flab-free minutes, there is no encore, despite the loudly hollered demands. Short, sharp and wild.