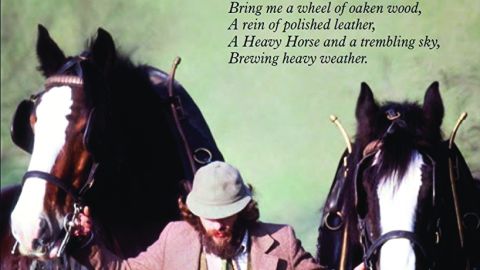 By 1978, Jethro Tull were still a formidable commercial presence on both sides of the Atlantic, but the glory days which spawned this most British of band’s two chart-topping US albums were beginning to fade. The previous year’s Songs From The Wood would be their final US Top 10 album. That record, the first in a ‘folk trilogy’, was a retreat into classically tinged rusticism which complemented the recently married frontman Ian Anderson’s move to a farmhouse in Buckinghamshire.

The follow-up, Heavy Horses, a lament for a disappearing rural world, was tougher but more sentimental. Liberated by returning to the music which had inspired Tull’s 1969 album Stand Up, there was a gentleness of touch, a clutch of soaring melodies, a shedding of the frenetic bombast which had served them so well and a yearning sense of Britishness so acute that Journeyman could speak wistfully of being ‘too late to stop for tea at Gerrards Cross’. The lengthy title suite – there were bells – was the sound of a band playing to their many strengths and, when Curved Air’s violin player Darryl Way guested, finding new ones.

This exhaustive reissue sprawls across three CDs and includes a Steven Wilson remix of the original, “associated recordings” and a 1978 concert in Berne. The whole package is also available as two DVDs, with the addition of TV ads for the Bursting Out live album and music videos which, as disco and punk raged around him, featured Anderson smoking rollups (Moths) and wearing wellington boots (Heavy Horses). What a gloriously contrary pop star he was.