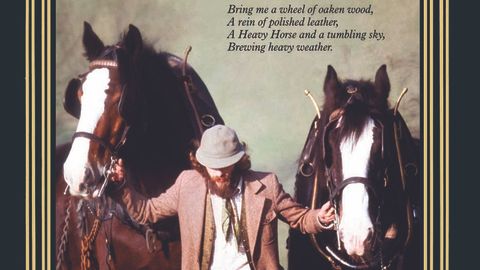 Like some lordly pied piper, Ian Anderson has led Jethro Tull’s legions of followers through many changes in style across 50 years. Having marched them from relatively simple rock songs through to extended suites and concept albums, the release of Heavy Horses followed Songs From The Wood, journeying into a folkloric landscape filled with bucolic tales and a hearty song. Appropriating the kinetic energy of jigs and reels and harnessing it into Tull’s music seems natural now, but it wasn’t to some folk’s tastes back in the day. 40 years on, as this five-disc demonstrates, Anderson was right to follow his own instincts.

“It’s not what you look at that matters, it’s what you see,” wrote Henry David Thoreau in Walden, his 1854 treatise on living in harmony with the land. One of the few writers in progressive music tackling the complexities and contradictions of the British class system, Anderson’s vision of a field tilled through an honest day’s work might suggest a romanticised portrait of the dignity of labour, but he’s canny enough to avoid unwelcome lapses into forelock-tugging nostalgia in his appreciation of times gone by.

Martin Barre’s biting tone and his impressive versatility imbue the material with such presence and vitality. That he carries off this animating role with such authority, regardless of whichever direction Tull embarked upon, speaks to the guitarist’s quiet, unflashy brilliance. Annotating the songs in much the same way that Anderson’s flute inscribes each track, Barre’s work possesses a reassuring depth, providing in a way a continuity of sorts that lets you know whatever the mode or muse, this is unmistakably, and authentically, Tull.

Barre is just one of the beneficiaries of Steven Wilson’s attention. Like his previous Tull remixes, Wilson manages the delicate business of simultaneously respecting the original parameters while broadening the available aural space. Delivering an impressive clarity, the elegant gallop of Rover, …And The Mouse Police Never Sleeps, and No Lullaby’s simmering percussion is especially exciting in their new, expansive settings.

The live show from Berne included in this edition packs such a terrific punch that it’s easy to understand why Anderson has been so effusive in his praise of King Crimson’s Jakko Jakszyk’s remixing efforts. While parts of 1978’s Bursting Out hailed from this performance, as good as that double album is, if you want to experience the full force of Tull in concert in the comfort of your own home, either in stereo or surround, this newly expanded version is definitely the one you should be reaching for.