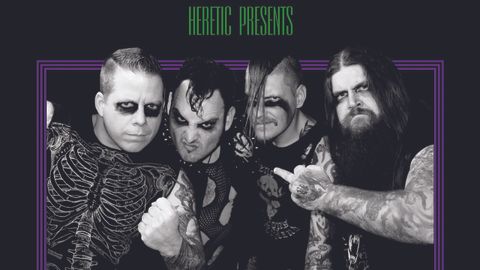 Underdogs Of The Underworld continues this and is even more scuzzy. Venom and NME still form the basis, but the sleazy swagger of The Dwarves, Zeke and Turbonegro is part of the mix too, while cover artwork is more Misfits than Mayhem – hell, they’re even sporting devil locks these days.

With songs like Overlords Of Sleaze and Blitzkrieg In Black, the emphasis is on hot, sweaty rock rather than ice-cold blasts. Hellbound Doomslut, Sexkommander and Nuclear Pussy set the tone, or lower it if you prefer. The song Black Metal Punks pretty much sets out their stall; if Heretic were a night out, it would probably involve cheap whiskey and cheaper illicit powders, then waking up in a police cell with a black eye and a rather unfortunate itch. If Midnight are not quite rock’n’roll enough, then Heretic may hit the spot.