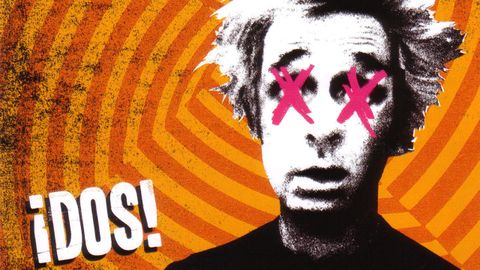 In the wake of Billie Joe Armstrong’s on-stage meltdown in Las Vegas in September and subsequent entrance into rehab, it’s difficult not to interpret 2012’s trilogy of albums as something of a musical midlife crisis. So, after ¡Uno!’s failed attempt to revive the spirit of Dookie, the follow-up has been billed as the band’s ‘party’ album.

What we get, however, is a grungily melodic set of songs mostly reminiscent of their garage-rock alter egos, The Foxboro Hot Tubs. When it hits the mark, sparks fly. Stop When The Red Lights Flash is a snarling return to form, all thrashing drums and finger-blister bass, while first single Stray Heart is a snotty rewiring of The Jam’s Town Called Malice, clearly part of a determination to retrace their way from the enormodomes back to the innocence of Kerplunk.

When things go wrong, however, they go spectacularly wrong. Fuck Time plays the so-stupid-it’s-clever card and fails abysmally, while Nightlife is a toe-curling excursion into rap-rock waters.

Muted acoustic finale Amy, meanwhile, finds Armstrong musing on the life of Ms Winehouse and is, we’re told, a precursor to the more reflective ¡Tre!

Let’s hope it contains at least one blockbuster ballad. But don’t count on it.