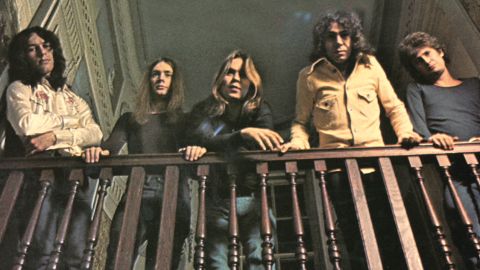 Years before Ronnie James Dio blew the world away fronting Ritchie Blackmore’s Rainbow (more of them later), he had come to the attention of Deep Purple while fronting New York State rock’n’rollers Elf, leading to his band being regularly employed as an opening act for Purple Mark II.

For their second album Carolina County Ball (1974, 7⁄10) Glover brought the band over to the UK to record at the newly opened Manor Studios and encouraged them to expand their sound. With Dio and piano player Mickey Lee Soule sharing all writing duties, this they duly did. The prevalence of piano in places brings shades of Elton John (whose seminal Goodbye Yellow Brick Road double, released the year before, was surely an influence), not least on the prophetically titled Rainbow, but also Happy and Blanche.

Carolina County Ball, though, covers a wide range of styles. The title track is an initially mid-tempo boogie-woogie that also features a clarinet, brass section and ace female backing vocals. Ain’t It All Amusing and the raucous Do The Same Thing sound more like the reason Elf opened for Purple on the Mark III line-up’s Burn tour.

The Elton John style is present in places on Trying To Burn The Sun (1975, 6⁄10), too – not least in the intro to Black Swampy Water, Prentice Wood and honky-tonk rockers Good Time Music and Liberty Road. But while Soule’s piano is undeniably strong and usually more upfront than Steve Edwards’ guitar, it’s Dio’s imperious voice that dominates. He’s stunning on When She Smiles and better still on Wonderworld, where a string section further contributes to it being the album’s most dramatic track.

Overall, though, this album seems a little less focused than its predecessor. In the end, it mattered not as Elf were defunct even before it hit the racks, four-fifths of them – guitarist Edwards deemed surplus to requirements – having already recorded the debut album by (and hit the road as) the first line-up of Rainbow…