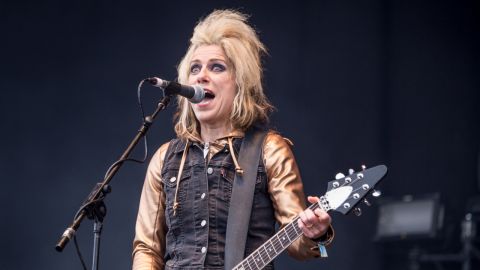 The ominous clouds just about hold off as Godsmack take to the Zippo Encore stage and it’s immediate that their songs have not stood the test of time.

Tracks like Cryin’ Like A Bitch, apparently written about main stage heroes Mötley Crüe please those down at the front, but they resonate no further than the first 10 rows. Frontman Sully Erna does his best to try and whip the crowd up into a frenzy, but his cockiness does not fare well with the majority of those in attendance. Whatever gets a circle pit going down at the front but it’s too little too late for the Massachusetts quintet. They end on I Stand Alone – a single taken from their 2003 album Faceless and receive a relatively warm round of applause. When you’re on such a competitive Download bill, you need to pull something special out of the bag and Godsmack emerge empty-handed this afternoon.

Thankfully the energy levels are ramped up as Eagles Of Death Metal take to the Zippo Encore stage. Frontman extraordinaire Jesse Hughes – imagine a sort of cocksure Ned Flanders – struts his stuff during Bad Dream Mama as deliciously decadent riffs blast from the amps.

Hughes – who acknowledges tonight’s headliners KISS – surges headlong into the seductive sounds of Cherry Cola and I Want You So Hard, oozing charisma all over the stage. They end with a lengthy jam, which sees their guitarist break out some considerable solos, only to be matched by Hughes, riff for riff, pose for pose. But that’s it. Their set is over in a blur and the audience clearly want more. Luckily, they’ll be back in the autumn for a full UK tour.

Recently reunited Los Angeles grungers L7 receive a heroes welcome. Void of any stage theatrics, they spend their 40 minutes smashing out classics from 1990’s Smell The Magic like Deathwish. Donita Sparks, however, gets mad at the crowd for being so docile early on in their set. They take heed and begin to get rowdy from the barrier to the back in no time at all.

Sludgy bass, raw vocals and chunky riffs come thick and fast as Shove, Shitlist and Fast And Frightening and they sound as relevant as ever. Sometimes, long-defunct bands should think twice before reuniting in order to keep their legacy intact. But on the evidence of today’s performance, 2015 feels like a fresh start for the Californian quartet. With a grunge-revival in full swing and a documentary in the works, it looks like they’re set to earn an entire generation of new fans at a satisfyingly quick rate.