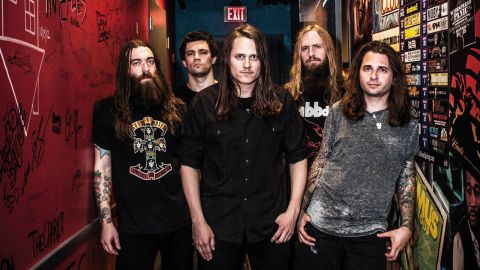 Darkest Hour fans can be proud to have had a personal hand in this album. After all, these DC metal pioneers’ ninth full-length was crowdfunded in excess of $70,000, and the result is as rich and ferocious as it is blessedly authentic.

True to the band’s punk ethos, Godless Prophets & The Migrant Flora is also more energetic than the last. It begins at a blistering pace, as though it were already halfway through. It’s been almost three years since their last release but opener Knife In The Safe Room sees a freshly bloodthirsty Darkest Hour with a gritty edge and fretwork at the forefront. Timeless Numbers enjoys playful tempo shifts, butch riffs, and irregular melodies dancing beneath the fury, while The Flesh & The Flowers Of Death just shreds.

The album quality isn’t surprising, however; not only did Kurt Ballou (Trap Them, Nails) produce but guitarist Kris Norris has returned to collaborate with the band for the first time since 2008. With some of the band’s early spirit restored, some newly memorable songwriting skills, and superbly euphoric guitarwork, it would seem that Darkest Hour plus Kurt Ballou plus Kris Norris is as killer a formula as expected.