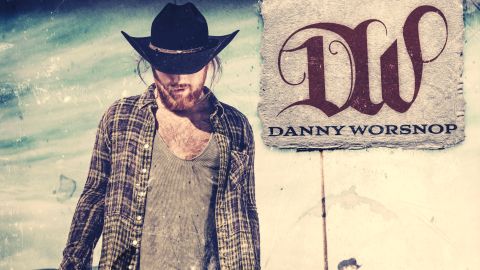 Danny Worsnop’s transformation from metalcoregurgler with Asking Alexandria to doyen of bluesy barroom country and whiskeysoaked balladry on this, his solo debut, makes David Bowie’s move from Philly soul to Teutonic proto-electronica seem minor. With producer Jim Kaufman (Helmet, Funeral For A Friend) at the helm, Worsnop has crafted a dozen hymns to booze and open-hearted confessionals that show his journey from Gilberdyke in Yorkshire to Los Angeles and finally to Nashville is complete.

‘Crafted’ implies contrivance, but actually the music on The Long Road Home is anything but. It comes, as therapists like to say, from a very real place. Worsnop has been through hell to get here. Still only 26, fame with AA hit him hard, and he dived into the drink and drugs ocean. He became homeless three times, went to rehab twice and was hospitalised so often he’d turn up at outpatients and they’d simply enquire, “The usual, sir?”

More seriously, he got royally dumped by the love of his life and, then tragically, both strung out on narcotics, he and his former stripper girlfriend lost their unborn child. Hardly surprisingly, there’s blood all over these tracks.

And pills and alcohol: anything to numb the pain. Opening track Prozac (‘We medicate until we’re softwareuiphraseguid=“d7853c97-4602-401d-ad80-1c042adfcbf5”>stabilised’) sets the weepy tone, but Worsnop’s agony doesn’t preclude melody: every track, whether harmony-drenched slow dance or hoedown, is hook-laden or engaging. It’s so unreconstructed, so 1974, it could almost be a postmodern genre exercise.

On Mexico, Worsnop heads for the border, where, bottle of Bud in hand, he’s ‘watching señoritas dancing on the beaches’. On the barnstorming I Feel Like Shit, the tipple of choice is tequila and lime, probably why it feels like ‘there’s a train inside my cranium and it’s running off the tracks’.

On Anyone But Me, the rhetorical cowboy wonders, ‘Has your heart ever been broken? Ever cried yourself to sleep?’ By the stark High, he admits, ‘I’ve been so high – been on top of the world’ and makes it sound like a plaint. It sounds as though he’s reached rock bottom (‘There’s a pit in my chest, a hole I can’t fill… I just want this to all be over’), until Quite A While, where suicidal thoughts find him seeking answers in religion.

There are tropes aplenty here, and titles that seem like composites of 70s classics, but there’s no denying the honesty of the venture, or the catchiness of the tunes. ‘You know I’m hooked ‘ the hoarse whisperer croaks on Midnight Woman. The feeling’s mutual, Danny boy.