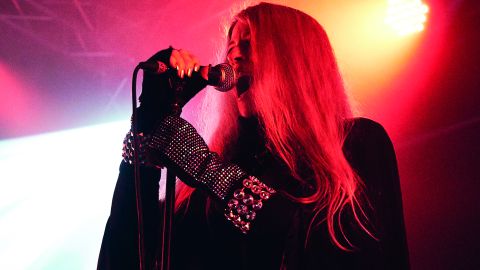 Making an all-too-infrequent appearance in London, Kent folk rockers GALLEY BEGGAR [8] invoke the spirits of Fairport Convention and Pentangle. Perhaps those aren’t immediate names in Hammer world but, signed to Rise Above and with albums recorded at Toe Rag (White Stripes/Electric Wizard), there is something that will reward the adventurous metal fan. Blending traditional folk with splashes of psychedelia – not least on a cover of 17th-century ballad, Let No Man Steal Your Thyme that gradually builds up to a head-spinning climax – and guided by Maria O’Donnell’s yearning vocals, they’re a timeless pastoral trip-out.

Few bands have created their own mythology quite so successfully as tonight’s headliners. In the late 60s, Jinx Dawson and her band laid the foundations for many of today’s occult rock bands with the classic album, Witchcraft Destroys Minds And Reaps Souls, which contains reputedly the first ever recorded black mass – and indeed the whole metal world has adopted her iconic devil horns hand gesture. The passing years have seen Jinx keep the name alive and recently resurrected the band with a new line-up, although Jinx herself seems to evade the ravages of time; no one can decide if it’s bathing in virgins’ blood or she has a portrait locked away in her attic. Expectations are high, so can COVEN [6] live up to their name? The dramatic opening with Jinx carried onstage in a coffin proves that she still understands the importance of psychodrama and ritual to the Satanic and the occult. Visually, Coven are stunning, however sonically things don’t run so smoothly. In many parts of the room guitars are inaudible with cavernous reverb swamping everything. Those standing directly in front of the stage can only hear guitars, which are too metallic, but nothing else. The lineup isn’t even half a dozen gigs old, and whilst there are flashes of greatness, the band are in need of some bedding in. They’re a little heavy-handed and so the psych soul of Black Sabbath (yes, it’s the same name but no, they sound nothing alike) and The White Witch Of Rose Hall loses its swing, becoming lumpen and somewhat flat. Dignitaries Of Hell and the once-shocking For Unlawful Carnal Knowledge are great songs whose power still remains. Blood On The Snow retains the power to move but for such a highly anticipated event it feels a little flat. Jinx’s voice, when the sound allows it to be heard, still sounds every bit as impassioned and soulful, but tonight they’re not nearly as groovy and you would have hoped. Not a disaster but some fine tuning is needed to do those classic albums proud.