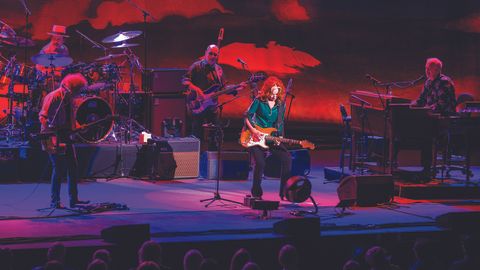 **Texan troubadour Jarrod **Dickenson appears relaxed and confident in the opening slot, his soulful Americana and laconic between-song asides quickly getting the audience hooked. With a rich tradition of storytelling running through his songs, it’s testament to the material that it requires no more than one man and his acoustic guitar to make it connect in this large hall. Bringing his wife along to duet for a couple of tunes doesn’t hurt matters of course, their voices intertwining beguilingly.

With more than 40 years in the business, Bonnie Raitt is a bona fide legend and her unhurried swagger as she saunters onto the stage suggests exactly that. Having played alongside the likes of Howlin’ Wolf and John Lee Hooker in the past, Raitt is enjoying a resurgence since her acclaimed comeback record Slipstream in 2012. Promoting current album, Dig In Deep, released in February this year, she opens with a reworking of the INXS hit Need You Tonight, transformed into a throbbing blues workout replete with sensuous slide guitar.

Raitt is a bona fide legend and her swagger suggests exactly that.

Tonight’s set is lightly peppered with tracks from the new record – including the funky shuffle of What You’re Doin’ To Me and unrepentant ode to the road Gypsy In Me – but there are some eclectic covers, too. Gerry Rafferty’s Right Down The Line sits alongside John Prine’s ballad Angel From Montgomery, Raitt’s blues heritage being underscored with Sippie Wallace’s Women Be Wise and an acoustic rendition of JB Lenoir’s Round And Round .

Naturally, such a seasoned pro has surrounded herself with an outstanding band, guitarist George Marinelli, bassist James Hutchinson, drummer Ricky Fataar and keyboardist Mike Finnigan bringing a little barroom grit to what is a relatively sedate setting. Finnigan even steps into the spotlight briefly, taking lead vocal and Hammond duties on a feisty version of BB King’s Don’t Answer The Door.

Such a lengthy career allows the cherry-picking of some classics too, the seductive groove of Something To Talk About complimenting the old-school blues of Everybody’s Crying Mercy. But it wouldn’t be a Bonnie Raitt show without her huge mainstream hit I Can’t Make You Love Me, a song she tells the audience is “just as important to me as it is to you”. Saved for the encore and just as spellbinding as ever, it’s countered by the bluesy stomp of Love Sneakin’ Up On You, just to make sure you leave with that unmistakable slide guitar ringing in your ears.