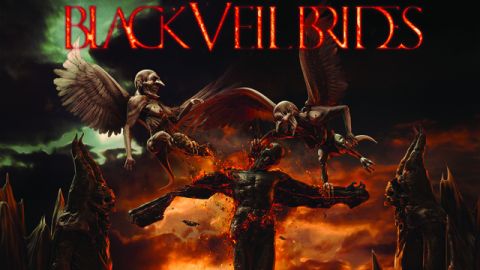 Unfortunately, Vale IS not a concept album about the Welsh valleys, but it is a flamboyant mixture of classic Black Veil Brides and frontman Andy Biersack’s pop persona. The Last One and Wake Up kick things off with some fist-pumping choruses, plenty of ‘Woahs’ and ‘Heys’, and some flamboyant guitar solos, continuing the trend of the purposefully overblown pomp Black Veil Brides have cultivated. Andy might not be the most inventive lyricist – some of his rhyming couplets are fairly clichéd – but the production, like the undulating strings in the background of When They Call My Name, and a stuttering synthonDead Man Walking, makes the songs sound stirring despite their apparent lack of introspection. Our Destiny, with its heavily multi-tracked vocals, sounds like a reject from Andy’s The Shadow Side album with some last-minute guitars thrown in, but there is a nod to Black Veil Brides’ earlier, more aggressive sound in My Vow. It would be a stretch to call it punk-influenced, but it’s fast, and contains more growls and grunts than the rest of the record.

Some tracks, like King Of Pain and Ballad Of The Lonely Hearts, sound rushed, with melodies that should be rousing but don’t quite hit the mark, as if Andy was locked in a room and told he couldn’t come out until he’d written some big, booming anthems. It would be unfair, though, to berate Black Veil Brides for not being the most erudite or believable band out there, because that’s not what they’re aiming for. They’ve always been about sounding and looking bombastic, paying homage to glam rock and making songs you can sing along to. In summary: is this record fun to listen to? It has its faults, but yes, yes it is.