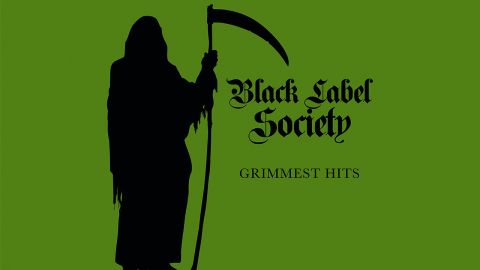 Now again teamed up with Ozzy Osbourne, who first brought the young shredder to the world’s attention 30 years ago, the perpetually busy Zakk Wylde has nonetheless been cranking out tours and albums with Black Label Society and his various other projects in the meantime, with 2014’s Catacombs Of The Black Vatican received as the band’s best in years after a run of solid but less memorable records. Now that he’s on the other side of 50, Grimmest Hits may point to a more mellow, mature Zakk – on record at least – but only once you’ve survived the initial thunderous onslaught that fans have come to expect.

The aptly titled Trampled Down Below rolls in on a cresting wave, with Zakk gleefully riding it and basking in the adulation of onlookers with Gibson in one hand and Valhalla Java coffee in the other. Aside from a suspenseful bass intro the rest of the band are, for all intents and purposes, in the background. Understandably, this is an album with guitar riffs front and centre, more often than not paying tribute to the man he affectionately refers to as The Boss and his now-disbanded compatriots. Seasons Of Falter swings like Sabbath at their grooviest while Disbelief has A National Acrobat written so blatantly on it you wonder how much of his time fronting the tribute band Zakk Sabbath has coerced his writing. Though the album title clearly has Zakk’s tongue firmly planted in his cheek, the standard of songcraft is high enough to establish most of, if not all of, the set among his other big hitters, with both the monolithic riff of A Love Unreal and All That Once Shined’s moribund blues kick into galloping drama, that’s made for the live setting. As is so often the case, it’s the former’s characterful solo that steals the show.

Black Label Society gigs and albums are known as exercises to showcase Zakk’s remarkable playing ability in a blur of distortion and wah wah along the fretboard. Yet at his best, most famously on No More Tears, his playing is about so much more than technical proficiency, imbuing his solos with real emotive character. It’s the case throughout Grimmest Hits, with his leads standing proudly as vital standouts of a song rather than a necessary tag-on. Also, having recently underlined to Hammer the importance of the mellower side of his discography, 2016’s solo Book Of Shadows II acoustic venture clearly looms over the album, with his high-pitched wail seen on the simple but devastating Illusions Of Peace largely taking on smoother tones, riding along on the back of the music rather than competing to see who’s going to be first through the barricade. Even the boisterous Room Of Nightmares and Bury Your Sorrow see the vocals slurring invitingly along behind walls of strings. Meanwhile, the blissful organ on the ballads The Only Words and The Day That Heaven Had Gone Away evokes Lynyrd Skynyrd’s Southern charm, with the solo of the latter joyfully reminiscent of Richie Sambora at the peak of Bon Jovi’s popularity. Whether Zakk’s reunion with ozzy will bear fruit in the form of a new and probably final album for the Double o remains to be seen, yet if the guitarist has enough songs like these ready to dig up then clearly there’d be no need to worry. For now, though, it’s great to hear New Jersey’s favourite berserker and his chapter doing what they do best.