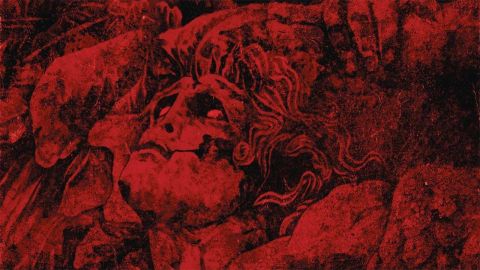 To Drink From The Night Itself

1. Der Widerstand
2. To Drink From The Night Itself
3. A Stare Bound In Stone
4. Palace Of Lepers
5. Daggers Of Black Haze
6. The Chasm
7. In Nameless Sleep
8. The Colours Of The Beast
9. A Labyrinth Of Tombs
10. Seas Of Starvation
11. In Death They Shall Burn
12. The Mirror Black

Despite the weight of expectation that comes with a 19-year studio absence after one of the greatest albums of the 90s, Slaughter Of The Soul, 2014’s At War With Reality was as good a comeback as you could have hoped for from the Gothenburg legends. Yet To Drink From… brings its own anticipation, given the departure of Anders Björler, whose original exit in 1996 caused the band’s premature dissolution, and the introduction of guitarist Jonas Stålhammar, enlisted from vocalist Tomas Lindberg and drummer Adrian Erlandsson’s The Lurking Fear project. Though the opening title track’s riff has a whiff of Blinded By Fear, At The Gates 2.0 keep the much-lauded familiarity and imbues it with a fervent spirit. Just as was the case with the last Anders-less The Haunted album, his brother, Jonas, has stepped up and delivered a state-of-the-art masterclass from a band still ahead of the game they helped create. A gritty mix gives the melodic twin riffs even more of a ferocious bite on the piercing cacophony of A Stare Bound In Stone, like Cerberus rabidly snarling while being held at bay by the galloping rhythm section. In Death They Shall Burn is as perfect as extreme metal songwriting gets, and while this is a nod to their raw, pre-Slaughter… infancy, the band also delve further back in time, with metallic antiquity referenced by Dagger Of Black Haze and the galloping lead of In Nameless Sleep revelling in their Maiden-isms. Slaughter Of The Soul will always be an untouchable milestone but album number six is still a classy achievement.