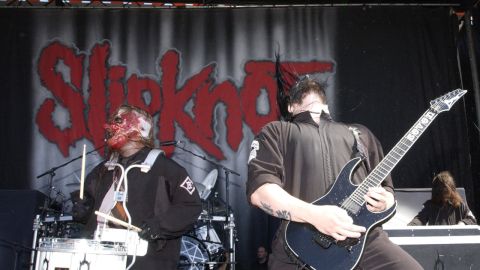 There are going to be maggots out there who will HATE this record. They will regard this as betrayal. Maybe they’ll burn copies in mass bonfires., Inevitable, of course. Had the ‘Knot just recycled Slipknot and Iowa, they would still have pissed people off. Though maybe different people. But this…acoustic guitars? Ballads? Fucking flower power music? Can you imagine Slipknot Unplugged? Yes, you can after you’ve heard this.

But you, reader, are not a [small c] conservative. You want music to be an adventure. You want the thrill of the ride, the unexpected twist and turns, and the implosions and explosions that make today’s hard rock the most vital and live expression of modern music, Slipknot third will deliver that thrill, as they always have done. You are either in for a surprise or a shock when you hear this for the first time, and how I envy yu, being able to hear this for the first time.

Where Ross Robinson would have bounced heads off the studio walls, and screamed until the veins on his head stood out to get results on those first two albums, Rick Rubin coaxes and experiments, building slowly and meticulously, and you can hear the difference from the outset. Where Iowa opened with the rage denched (515)/People = Shit. _Prelude 3.0 _eschews the histrionics for a darker, heavier and spacious sound. It’s weird, Tool like at times, but as soon as we reach The Blister Exists, there’s no doubt that this is a Slipknot record.

This is war music for war time, a pulverizing martial beat and explosions of noise like well aimed bunker busters. Along with the curiously retro-rap rock of Three Nil and the amazing widescreen blast of Pulse Of The Maggots, this is Slipknot as we know them and love them. But Hammer would defy anyone to hear The Circle or Vermillion or The Virus Of Life and guess that it was Slipknot.

Circle is a mad bit of psychedelic folk rock reminiscent of Mark Lanegan or Arthur Lee and Love. Vermillion sounds like John Barry [who composed all the best Bond themes] had he written a song for Iggy Pop. The Virus Of Life could easily have been an outtake from Massive Attack’s Mezzanine. The final track, Vermillion Part 2, is completely acoustic with Corey singing close harmonies with the rest of the band, and a string section driving the whole thing to an emotional crescendo. Beautiful but, let’s face it, it’s not Scissors.

The first two albums were stark black and white [mostly black]. This is multi-coloured, full of shade and subtlety, never a word you could immediately associate with Slipknot. Obviously, the extra-curricular projects of Corey Joey Shaun resonate throughout this album; there are definite Stone Sour moments, and To My Surprise Moments.

It takes balls of steel to fuck with a winning formula, and Vol. 3 (The Subliminal Verses) could easily be Slipknot’s 14-track suicide note, alienating loyal fans who just want more songs about serial killers that they can mosh along to. But it’s a great record filled throughout with the shock of the new, and it makes all their one-time contemporaries and imitators sound like the plodding donkeys they are.