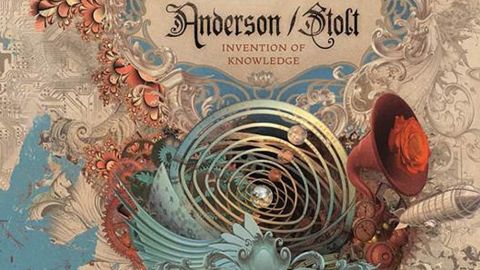 It’s one of those inspired ideas which is almost so obviously bound to work that you fear there’s going to be a catch. While the optimist in us all gets excited, our inner pessimist whispers that surely it’s too good to be true. Well, this time, the optimist is right. Which is, of course, the only way the peerlessly positive Jon Anderson would have it.

Teaming up these two prog princes from different eras results in a beautiful album that’s effectively the best of both worlds. There’s no sense of cagey compromise or polite deference, and both artists extend themselves freely, exploring and expressing vast swathes of musical terrain which nonetheless sound a lot like what Anderson would call Yesmusic. While the singer has been cheerfully prolific in recent years – the ongoing collaborations with Jean-Luc Ponty and Anderson Rabin & Wakeman attest to that – this is arguably what devotees dreamed of hearing most of all. Invention Of Knowledge knowingly echoes elements of 70s-era Yes or Olias Of Sunhillow, without mimicking them. (Mimicking them would, let’s face it, be quite a task.) Not slavishly, though. It tunes in to the feel, the light and shade, of those hallowed works, and makes its own magic with that palette.

There’s a simpatico here which illuminates both these prog princes.

It’s a stronger summoning of Yesmusic than anything Yes have managed in a while, and will provide ammo to those who believe Anderson is now the true spiritual carrier of the torch. To support this, there are just four long segmented tracks, with the longest running effortlessly to 23 minutes. (Even the shortest, the gentle finale Know, clocks in at 11 minutes.)

Roine Stolt, then, deserves great credit for his taste and touch. The Flower Kings/Transatlantic guitarist (and all-rounder) has said he wanted this to sound timeless. Interestingly, the Swede and Anderson met for the first time on a boat. Not just any boat, but the Progressive Nation At Sea cruise ship, in 2014, where Jon had agreed to perform a couple of songs with Transatlantic. His evergreen enthusiasm then led him to suggest they also play the first side of Tales From Topographic Oceans. Now, knocking up a version of that requires a little more practice than bashing out Louie Louie, but somehow the onboard crew managed it, and a bond was forged.

The pair began exchanging ideas across continents and time differences via the internet, and Stolt enjoyed Anderson’s assertion that there were to be no restrictions. He even emphasised that it was more important the music should be progressive than that it should be rock. And while the pearl they’ve cultured is one that flows languidly between genres, it’s clear that heaviness or riffery was not the motivation. Like the Yes of their creative heyday, it’s about elegantly stretching sounds until a kind of relaxed euphoria is attained.

In practical terms, Stolt recorded the basic platforms with Flower Kings rhythm section Jonas Reingold and Felix Lehrmann, with Tom Brislin (of the Yes Symphonic tour) on keyboards. Backing vocals were contributed by everyone from Nad Sylvan to Anja Obermayer, while Anderson sprinkled his stardust vocals in California. Less practically, Accrington’s finest calls it a “musical mystical journey” (we’d expect no less), and as such it’s not easy to describe or deconstruct in conventional critical terms. Like the best Yesmusic, it’s about the elevated mood it creates, the sun-dappled ambience with which it fills the room, rather than pulling away the curtain to squint at how it’s done.

There is clearly a concept, a through-line, at play here, despite the forsaking of weary linear structure. Within the four titles – Invention Of Knowledge, Knowing, Everybody Heals and Know – are deft details, refrains leading to resolution. The section subtitled We Are Truth enjoys a loopy motif, and melody is a frequent visitor while never setting up camp amid the lovely, liberal looseness. Everybody Heals teases between string effects and multiple guitar lines. Elsewhere, Stolt picks up Dobro and lap steel, conjuring wonders.

‘Do the best you can/never fail to dream,’ sings Anderson in those uniquely evocative tones, and Invention Of Knowledge is wonderfully impressive in its unfettered flights of favourableness.

There’s a simpatico stream of musical consciousness in this welcome working rapport which illuminates both parties. You simply must get to know this album.