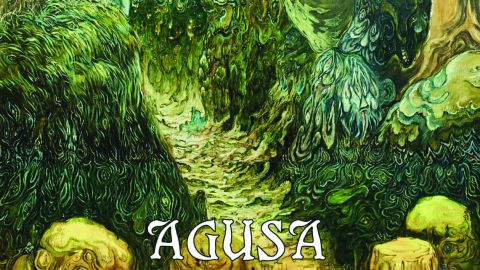 The Asteroid is coming! With members drawn from Crippled Black Phoenix and, er, Charlotte Church’s Late Night Pop Dungeon, Asteroid Deluxe are a motley quartet of seasoned musicians who create a highly accomplished and compelling prog soundscape. Debut album The Lawn (asteroiddeluxe.com) is an ambitious work split into two magnificent, 20-minute parts. There’s some Gong here, a little Floyd there, but we’re mainly on modern, and achingly prescient, turf. The album was inspired by the post-war pipedream of high-rise living and the Ballardian erosion thereof, and was recorded before the horrors of GrenfellTower. It’s all the more poignant for that tragedy, with fuzzy riffs, cinematic longeurs and atavistic tribal moments offering plenty to get your teeth into.

Swedish psych rockers Agusa are back with their self-titled third work, on Laser’s Edge. Their deliciously sylvan, Tull-infused psychedelic jams are presented in bitesized morsels, with Jenny Puertas’s flute to the fore from the off (opener Landet Längesen) and new Hammond-wrangler Jeppe Juul staking his claim with dextrous aplomb. They’re vintage retro alright, and so good at what they do.

When he straps on his guitar, Berlin-based producer and founder member of Efterklang Martyn Heyne is the kind of oblique player who takes the instrument to a completely different textural plane. But on his full-length debut Electric Intervals (7K!) you forget all about the how, and luxuriate in the why. From the brittly spare, hypnotic keyboard pieces of 2400 and Luxury, this is sophisticated, classy mood music for the slow-movement types among us.

Then there’s enduring Welsh proggers Multi Story, who returned last year with quality neo-prog release Crimson Stone. Their double live album Live At Acapela (F2) was recorded in Cardiff on the subsequent tour, with old school frontman Paul Ford leading the 2017 line-up through an assured and well-received set. Proudly derivative of Genesis, Marillion et al they may be, but the atmosphere they create here augurs well for their turn at this year’s HRH Prog.

Finally, If You Think I’m Crazy! is the self-released solo album from Uriah Heep keyboardist Phil Lanzon. As you might expect it’s a bombastic, fun, and well-produced slab of melodic rock, and while the tone is pretty conventional there are more than enough proggy flourishes and theatrical moments to make it, ultimately, a really pleasant surprise.