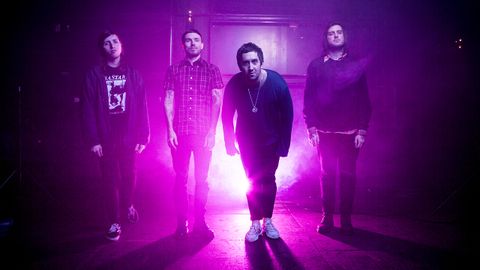 Nothing: Tired Of Tomorrow

There’s nothing quite like a good old-fashioned mope as we start heading into the warmer months, and right now, no one is getting their sulk on with quite so much style as Philadelphia’s Nothing, as they prove on their accomplished second album, Tired Of Tomorrow. This, in case you were wondering, is a compliment.

With their warm, evocative, hot fuzz production, muted vocals and keening atmospherics that set them down somewhere between Slowdive, Mew and early Radiohead (see the surely deliberate echo of Creep in Eaten By Worms for evidence of the latter), they sigh their way through a set of tracks that are simply billowing with maudlin beauty.

Thankfully, though, there’s an edge to it all too. A hint of menace comes through, as rough-edged stabs of guitar occasionally break the surface tension, like moments of unsuccessfully repressed anger bubbling away just beneath the sadness. There’s no doubt these songs will sound utterly magnificent when the rain’s lashing down on the festival crowds this summer. (8⁄10)

If The Joy Formidable had arrived in the mid-90s, they would have been huge. Alas, despite 2011’s impeccable hit Whirring, public tastes weren’t with their personality-stuffed alt.rock, and so they remain underground with third album Hitch. While frontwoman Ritzy Bryan remains a force of nature, there’s a lack of eureka moments this time, leaving us with a slow-burner rather than an inferno. (6⁄10)

Coming on like The Fall bundling Fugazi into the back of a van and forcing them into a night of debauchery, FOTL have been making blackly funny, mental music since the end of frontman Andrew Falkous’s previous band Mclusky. This album finds them surrounded by squelching basslines, scattershott guitars and pop-eyed vocals, and it’s brilliant. (7⁄10)

Like Animal Collective, Broncho hit that Velvet Underground-inspired, fuzz-laden sweet spot and pile it high with hazy, summery alt.pop melodies and an outrageously palpable sense of uniquely American cool. On third album Double Vanity it seems the wide-open spaces of their Oklahoma home have inspired something rather beautiful to zone out to. (7⁄10)

Mogwai have been the kings of soundtracks and soundscapes for years. But this time they’re making music to real-life horror, inspired by the atomic bomb that dropped on Hiroshima and the paranoia of the Cold War that followed. The result is masterful: unsettling, retro-futuristic, beautiful and intense, but deeply immersive and listenable. They’ve come a long way since Come On Die Young. (8⁄10)