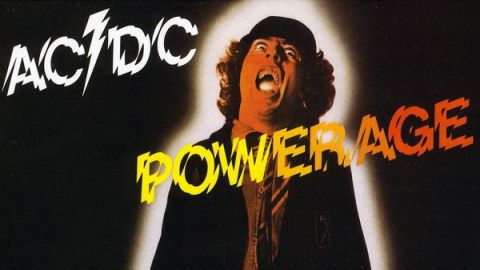 Conceived as a showcase that would place AC/DC right up there with the American superstars they were now sharing stages with, Powerage was split down the middle between yet more ton-up AC/DC classics such as Down Payment Blues, and more elliptical tracks such as What’s Next To The Moon.

In the former, the difference in mood is pinpointed by the change in perspective of Bon’s lyrics. He was still writing about the long way to the top, but no longer self-mythologising, talking instead of ‘Feeling like a paper cup/Floating down a storm drain’. The latter, with its circular guitar figure replacing the juddering block chords of yore, was the most transcendent moment on any AC/DC album yet, the lyrics staring past love and pain, focusing instead on that thing just out of reach.

It had the same yo-yoing dynamic throughout its nine tracks: one moment a perfect-10 rock monster like Riff Raff, its crazed, spiralling riff belying its solitary verse about being ‘Down in Mexico’, the next moment another seductively mid-paced stroller built around a tight, almost pop guitar figure: Gone Shootin. This time, though, the subject matter is truly murky: a song about a girl who ‘sure is loaded’ and ‘never says bye bye’, it’s a direct reference to Bon’s on-off relationship with his girlfriend Silver.

Sin City begins like classic AC/DC – towering intro, all-guns-blazing riff – but again the story is much deeper. On the surface, about a gambler going ‘in to win’ in Las Vegas, it’s also a metaphor for the assault AC/DC were now intent on making on the US charts. With its low-slung guitars and chugging drums, Gimme A Bullet sounds more like the Lynyrd Skynyrd number it almost steals its title from than anything AC/DC had put down on vinyl before.

The final two tracks, Up To My Neck In You and Kicked In The Teeth, also exemplify this new dynamic. Although both date back to the earlier Powerage sessions of six months before, only the latter sounds like it comes from an earlier era, Bon literally screaming over the intro about a ‘two-faced woman’ telling ‘two-faced lies’.

Keith Richards knows a thing or two about rock’n’roll. So does Joe Perry. And both have cited Powerage as their favourite AC/DC album. It is, simply, AC/DC’s purest rock’n’roll record. “The whole band means it, and you can hear it,” Richards said.