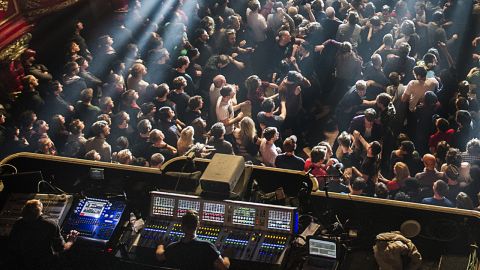 In what is becoming a festive tradition, Abel Ganz have booked a room at the shamelessly arty-farty CCA and ensured founding members Hew Montgomery and Hugh Carter are part of proceedings – although they can’t be convinced to join their old pals on stage.

But still there’s anticipation in the air as Glasgow’s small but committed prog army wait for their hometown heroes to get started. The thing is, Abel Ganz are in real danger of being upstaged by support act Tiger Moth Tales. Describing Peter Jones as a one-man band is doing him an almighty disservice, for his remarkable show is free of any kind of cheap shtick.

He plays a bass drum, piano, lap guitar and recorder with a level of skill few can match. On top of that, his wildly versatile voice is a quite stunning instrument in its own right, and he is as charming and witty a character as you’re ever likely to see.

The mostly older audience at first appear a little unsure what to make of the blind man holding court with his fantastic tales of merry vicars and curious creatures. But by the time he’s through with his first few songs, Jones is being cheered wholeheartedly. His perfectly bonkers cover of Genesis’ Harold The Barrel is as unexpected as it is brilliant.

Follow that if you can, Abel Ganz. And to be fair, they don’t do a half bad job. Opening with Rain Again, frontman Mick McFarlane touchingly credits Carter and Montgomery as the writers and proceeds to deliver a performance full of genuine spirit.

Ventura and Unconditional give a nod to the band’s more recent output and are as well received as the old classics, but it’s McFarlane’s ode to his parents, Thank You, that really hits the spot.

Abel Ganz find their stride from the first note and boast an almost telepathic understanding on stage. Even when things threaten to go off track on a few occasions, a simple nod between guitarist Davie Mitchell and keyboard player Jack Webb brings things back in line. They are masters of their trade and tonight they’re revelling in the glow of an audience that includes more than a few Steve Hackett and Yes T-shirts.

And the slick performance means that Carter – manning the merch desk ahead of his post-show DJ set – has no trouble shifting a fair few Abel Ganz garments. With Jones joining the hosts for a superb encore in the shape of Chris Squire and Alan White’s Christmas classic Run With The Fox, a more fitting finish would be hard to imagine.