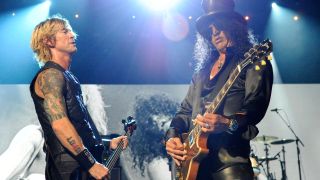 Former Guns n'Roses guitarist Slash says he's not concerned about bassist Duff McKagan's reunion with Axl Rose – and he knows he'll never get a similar call from his former bandmate.

McKagan is standing in for a run of South American GnR shows after current member Tommy Stinson had to concentrate on his previous band The Replacements.

Slash – who’s just confirmed his third solo album has been completed – tells TeamRock: “What Duff does is what Duff does. It doesn’t really concern me.

“Duff’s relationship with Axl is different to mine. That call to me is just not going to happen.”

But that doesn’t mean the axeman is critical of his Velvet Revolver colleague’s move. He explains: “I don’t judge Duff. He’s cool. He just has a way more amicable, neutral relationship with Axl than I do.”