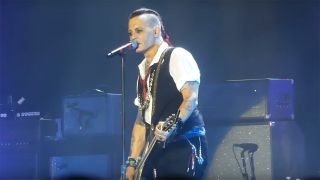 Hollywood Vampires, the supergroup featuring Alice Cooper, Aerosmith’s Joe Perry and actor and guitarist Johnny Depp, will play live across the UK and Europe next month.

And during their recent set at the Sands Bethlehem Event Center in the US, they gave fans a taste of what to expect, with Depp taking over vocal duties for a cover of David Bowie’s classic 1977 track Heroes.

Watch the fan-shot footage below.

Last week in an interview with London’s Evening Standard, Cooper reported that Depp was as “good as anybody I’ve worked with.”

He added: “He’s not new to playing on stage – people are going to be very surprised when they hear him play because they know him as Jack Sparrow.

“When they see a guitar in this band they’re going to say, ‘Wait a minute. I didn’t have any idea he could play like that.’

“He’s a real guitar player. I wouldn’t be working with anybody that wasn’t as good as anybody I’ve worked with normally.”

Find a full list of the Hollywood Vampires’ upcoming shows below.

Buy their album from Amazon