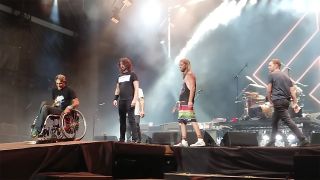 We all know that Dave Grohl is the nicest man in rock – and he added another big-hearted gesture to his résumé during Foo Fighters’ recent set at Hungary’s Sziget Festival.

Pointing to man in a wheelchair who was being held above the crowd, Grohl said: “He’s the star of the show! I have a question: You wanna come up and watch the show from up here? Bring him up here – come and see the show.”

The crowd duly obliged and within a minute, the fan was onstage, giving Grohl a hug. But the vocalist and guitarist wasn’t done and then picked out a fan he dubbed Bubble Girl to stand behind drummer Taylor Hawkins, where she proceeded to blow bubbles as the band ripped through Everlong.

At the end of the set, the fan in the wheelchair even got the chance to pick up Grohl’s guitar as he made his way from the stage, before launching it down the stage ramp – much to the delight of the band.

Foo Fighters’ next show will be in Glasgow on Saturday, where they’ll headline the city Bellahouston Park. The following weekend, the Foos will headline Reading and Leeds.