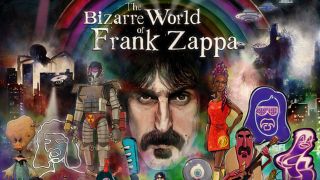 The project first came to light in September last year, with the news splitting opinion among Frank’s fans. But in the trailer – which can be seen below – an audio clip of Zappa talking about holograms can be heard.

While The Bizarre World Of Frank Zappa tour dates have still to be announced, a list of the musicians who will perform at the shows include Ray White, Mike Keneally, Scott Thunes, Robert Martin, Ed Mann with Joe “Vaultmeister” Travers.

Ahmet Zappa, from the Zappa Family Trust, says: “The development of the Bizarre World has been a herculean undertaking and an extremely emotional journey for me. Weirdly, it's also been one of the most creatively satisfying projects that I have ever had the privilege of working on.

“It’s fascinating to me how into holograms my dad was and it’s unbelievable that we have Frank in his own words talking about it. The fact that we’re now finally able to technologically bring to life the ideas and concepts my father talked about so many years ago is astonishing.

“People’s minds, eyes and ears will be stunned by the crazy amounts of awesomeness they'll be exposed to every night on this tour.

“For the first time in a long time, Zappa fans will get to see and hear brand spanking new music performed by Frank with his live band and enjoy never before heard versions of their favourite songs, all while brain-melting visuals make them laugh, smile, and perhaps even cry.”

He adds: “I truly can’t wait to share this epic experience with everyone and I’m thrilled that we’ll be doing 100 + dates around the world. So please fasten your concert-going seatbelts because things in the Zappa universe are about to get even more bizarre!”

Tour dates will be revealed in due course.