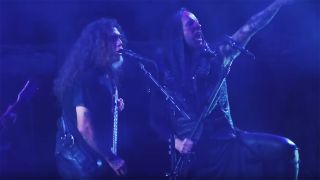 Tom Araya and Nergal on stage in Poland

Slayer kicked off the the sixth leg of their final world tour last night at the Gliwice Arena in Poland.

Fans attending the thrash veterans’ first European summer show were in for a surprise when Behemoth vocalist and guitarist Nergal joined them on stage to rip through a blistering version of Slayer’s 1983 track Evil Has No Boundaries.

Live footage of the performance has been uploaded to YouTube, with Behemoth’s Facebook page sharing the clip earlier this morning.

Behemoth joined Slayer on tour across North America last year and Nergal later spoke of the experience, saying in an interview with Nuclear Blast: "It makes me sad to see Slayer go.

“It was a huge honour to be part of it. It was amazing on one hand, on the other it was pretty sad. I just can’t imagine a world without Slayer.

Slayer’s next European show will take place tomorrow (June 6) at the Sweden Rock Festival. Slayer will also play other festivals over the summer, including, Rock Am Ring, Download UK, Graspop Metal Meeting, Hellfest and Resurrection Fest.