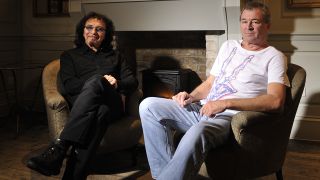 Tony Iommi and Ian Gillan were guests in the Armenian capital of Yerevan yesterday where they were recognised for their fundraising efforts.

The pair joined forces with a host of other musicians in 1989 to record a cover of Deep Purple classic Smoke On The Water to raise money for charity after a devastating earthquake decimated the city of Spitak the year before.

An estimated 40,000 people lost their lives during the disaster, with Iommi and Gillan coming together again in 2011 with Nicko McBrain, Jason Newsted, Mikko Lindstrom and Jon Lord for the two-track single Out Of My Mind/Holy Water to raise further funds for Rock Aid Armenia.

Rolling Stone report that Iommi and Gillan, who worked together in Black Sabbath on 1993’s Born Again album, attended the event with Armenian prime minister Nikol Pashinyan, along with Jon Dee who was behind the Smoke On The Water charity single.

While there, the Naregatsi Orchestra performed a cover of Black Sabbath's Technical Ecstasy track She's Gone – video of which can be watched below.

Later, Iommi posted a photo of himself, Gillan and Dee with the orchestra and said: Great day here in Armenia, Ian and I have just been with the Naregatsi Orchestra."

Great day here in Armenia, Ian and I have just been with the Naregatsi Orchestra.Video: https://t.co/5Fw3nvswv4 pic.twitter.com/aerOiecvccJune 5, 2019