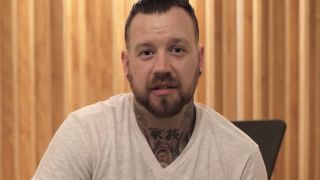 Oregon State Police have arrested Walls Of Jericho drummer Dustin Schoenhofer after an alleged 632 lbs of marijuana and 36.8 lbs of suspected honey oil extract was discovered in the back of his Chevy pick-up truck.

Ohio resident Schoenhofer was pulled over for a traffic violation for hitting 57mph in a 35mph zone. His vehicle was then searched and the drugs were subsequently found, with the marijuana contained in 21 bales.

A police statement reads: “On October 23, 2019, at about 3pm, an Oregon State police trooper stopped a 2015 Chevy Pickup on Highway 140E near milepost 15 for a traffic violation.

“During the traffic stop the trooper obtained probable cause to search the vehicle. During the search the Trooper located 632.5 lbs of marijuana and 36.8 lbs of suspected BHO – Butane Honey Oil – extract.

“The driver was identified as Dustin R. Schoenhofer, age 41, from Ohio. Through the investigation, investigators learned the marijuana and BHO extract was destined for Ohio."

Schoenhofer confirmed he was driving to Ohio, but denied knowing the marijuana was in the back of the truck.

The Mail Tribune report that Schoenhofer’s bail has been set at $45,000.