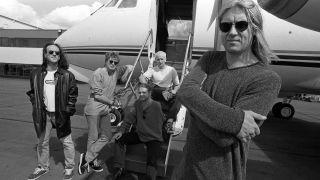 Vivian Campbell has recalled how Soundgarden influenced Def Leppard in the mid-90s.

The guitarist, who has also performed with Dio and Whitesnake, says the band were listening to iconic Soundgarden album Superunknown when they wrote 1996’s Slang – which was widely regarded as a musical departure from their signature sound.

Campbell tells Eon Music: “We went into the recording and writing process for that record knowing only one thing – we could not make a classic sounding Def Leppard record. Other than that, we were clueless, so we were kind of making it up as we went along.

“We were taking on board a lot of what was going on in the current music genre. Soundgarden’s Superunknown was the one album that we listened to more than any other when we were making that record. I think it was the best record of the grunge era.

“I love the songs, I love the sound of that record, so that was a very influential record for us when we were making Slang.”

Though some of the material on Slang did not go entirely to plan, Campbell insists that “it’s an interesting record,” adding: “That’s one of the best sounding Def Leppard records ever, because of the nature of it.”

He continues: “There’s more of a vibe to it. It’s more of an organic record, and I love the way it sounds.

“I think it’s kind of hit or miss with some of the songs, but I realise why we, as a band were doing that. It was 1995 when we were recording that – it was the middle of the grunge era.”