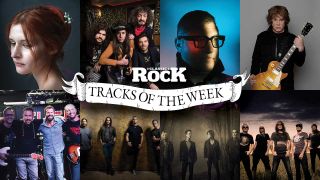 If music truly is the food of love, well, it's time for dinner. And we're gonna eat.

We've picked eight outstanding songs from the myriad of excitable releases that have come our way since the last time we did this, and we've listed them below. They're in no particular order, so we'd we'd like you to order them for us, by voting in the handy poll located at the bottom of the page.

But first, we'd like to celebrate last week's Olympic podium of rock. It was almost a battle to the death between Empyre and Shades Of Grey, but the former's campaign just about won out, with Black Star Riders bringing up a creditable third.

So congratulations to Empyre. This was them.

It’s not all baguettes and Gojira in France – as Toulouse band Sabotage are proving with style. Catch That Train offers riffy, luxury nostalgia in the vein of Rival Sons, Dirty Honey etc, with a whiff of the south as told by Blackberry Smoke. A welcome addition to the current wave of new old-fashioned classic rock.

We’re loving this stand-out slice of the Afghan Whigs’ frontman’s solo album, Random Desire, which comes with a video paying homage to the Bob Fosse movie All That Jazz. “‘Pantomima’ feels like a show tune to me,” Dulli says. Not a show tune in the trad thirties/forties jazz-handsy sense, but it is imbued with optimistic light and energy that helps you see what he means.

Gary Moore - Still Got the Blues (Live In London)

“People ask me, ‘Where do the blues go next?’” Gary Moore once said. “I always answer, ‘They’ve already been everywhere, all round the world a million times.’ The point is where the blues takes you next." Wise words from the late Moore, who Live In London album comes out this week. Still Got the Blues is a highlight: no one sounds like Moore, and no one played the blues like him either.

Slick stuff from Welsh rockers Sonny Jim: With a riff that rattles along like a marauding ox and a vocal straight from the Jay Buchanan school of blues rock, Mutual thunders its way towards a lively chorus and a solo played by a man who – judging by the video – owns more guitars than is strictly necessary. Nice backing vocals, too.

Alter Bridge are one of the bands who appear incapable of doing anything wrong, with each new release elevating the band further in the eyes of the true believers. Some nice 80s synths open this one, and then it's business as usual: effortlessly disciplined rock'n'roll, a soaring vocal from yer man Kennedy, and a chorus that'll have 'em bellowing in every enormo-dome from Kansas to Kazakhstan.

This sounds like it was written to order, a sweet four minutes of tender Americana to be sung by the band at the end of a successful set. You can picture the scene: it's the last song, the house lights come on, strangers embrace, drunks weep, and everyone goes home brimming with emotion. Cynical? Perhaps. Will it work? Undoubtedly. Do we care? No a bit. Any further questions? Not at this time.

In which Steve Harris & Co. celebrate the release of their second album by releasing the title track. It's not as bombastic as that other band he's in, and it's not as sonically exciting you might expect from a modern rock production. But it's got melody aplenty and a decent fake ending. Nice guitars too.